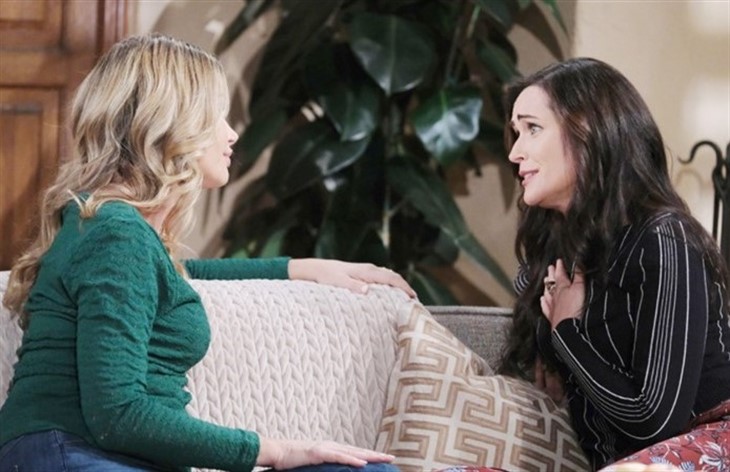 The Bold And The Beautiful Spoilers – Quinn Forrester Was Unfaithful To Eric Forrester, Did Someone See?

Viewers of The Bold and The Beautiful will recall that Quinn and Carter Walton (Lawrence Saint-Victor) had gotten to be close friends over their individual romantic situations having fallen apart. They had confided in each other about some very personal things, him regarding his broken engagement with Zoe Buckingham (Kiara Barnes), her about her broken sex life with Eric! While Eric was out of town on a brief business trip, somehow their friendship turned into something it never should have, and Carter did something more wrong than Zoe and he and Quinn wound up in bed!

Whether it was a one-night stand of grief sex or if it will turn out to be more remains to be seen; but Zoe’s sister, Paris Buckingham (Diamond White) had offered to help Zoe win back Carter. Paris was the one who had inadvertently exposed Zoe’s come-on to Zende Dominguez, (Delon deMetz) the man Paris is now with the night before Zoe was to marry Carter, which of course blew the whole thing up! Could Paris have gone to see Carter as a part of that offer to help Zoe reconcile with him and saw him and Quinn together? She may not have seen them together en delicto flagrante (in the act) but she may have seen Quinn go to his loft and then gone back the next morning and saw her come out! As viewers of The Bold and The Beautiful know, it doesn’t take a rocket scientist to figure out what happened! Perhaps Paris told Zende and Zende told Eric!

It has only been recently that Eric allowed Quinn to move back in with him but he still has had no desire to be intimate with Quinn, which is what led Quinn into temptation over Carter – although she started to put a stop to it. After they started making out Quinn just couldn’t control herself! Eric also still doesn’t trust Quinn – and for good reason! If Paris did see Quinn come in and out of Carter’s loft and told Zende, and Zende wanted to warn Eric, no wonder Quinn’s in a tight spot – and if Shauna knows about it and tries to be an alibi for Quinn, Eric will feel betrayed by both!