The Young And The Restless (Y&R) Spoilers: Devon Has A Warning For Amanda – Family Trouble Ahead 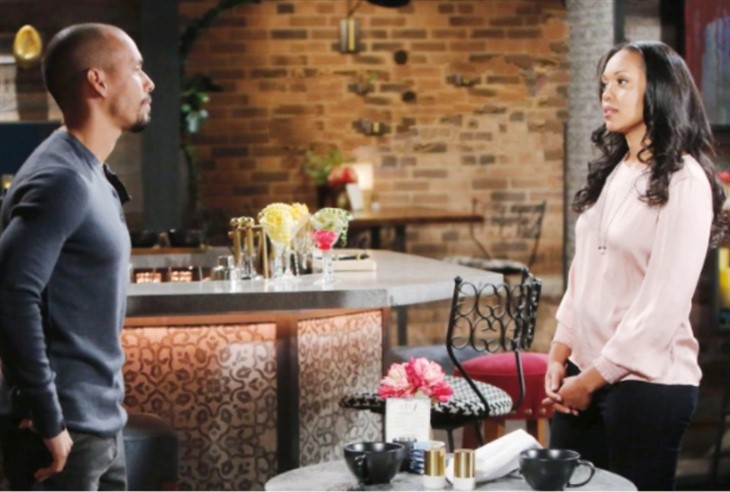 The Young and the Restless (Y&R) spoilers say that Devon Hamilton (Bryton James) feels as though something is up, and he’s about to get to the bottom of things. After he sees Sutton Ames (Jack Landron) and Imani (Leigh-Ann Rose) chatting up a storm about something, he wastes no time in letting Amanda Sinclair (Mishael Morgan) know that she needs to keep an eye on her family members. Read on for all of the latest spoilers.

Even though Devon can’t hear a word of what they are saying, he becomes suspicious when Amanda’s grandfather and sister are interacting in an odd way. When Imani boards the elevator, Devon immediately sends a text to Amanda to let her know what’s up.

Speaking to Soap Opera Digest in a new interview, The Young and the Restless Co-Executive Producer and Head Writer Josh Griffith says that Devon believes what he just witnessed was a conspiratorial conversation between the two of them. Griffith puts it this way, “Devon knows that Imani has a history of causing trouble for Amanda, so he sends a text so she’s ready for Imani’s visit.”

The Young and the Restless spoilers say that Amanda is left surprised when Imani shows up and apologizes for her past behavior. Yet, as someone who never went to law school and has never taken the bar exam, she offers to help Amanda with Sutton’s case. Later on, Amanda fills Devon in about their conversation and tells him that she is tempted to see what Imani is up to. But Devon doesn’t think any of this is a good idea.

Griffith teases, “Devon warns Amanda not to let her guard down with her new family. Devon believes there is more to these people than what meets the eye.”