The Bold And The Beautiful Rumors: Is Unhinged Quinn Forrester Hallucinating Carter Hook-up, It Was All A Dream? 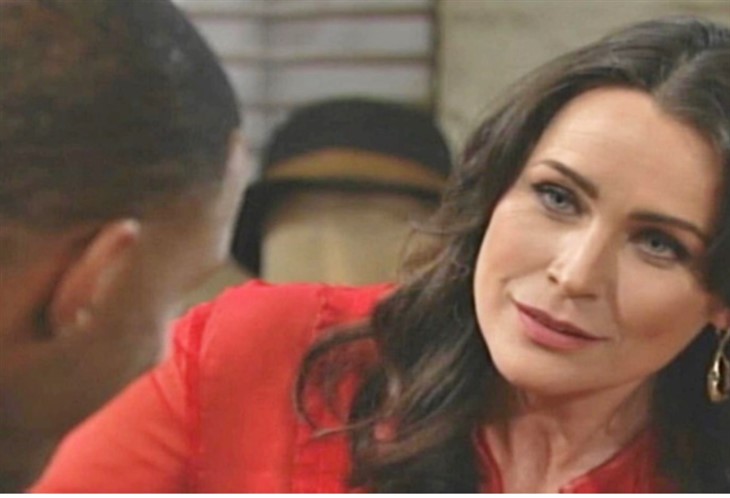 The Bold and the Beautiful (B&B) spoilers reveal that you may want to sit down for what we are about to tell you. This speculation has all sorts of hellacious and unforeseen consequences if it turns out to be true. It’s hard to remember the last time a soap went in this direction, and with the character involved any kind of combustive outcome is possible.

We’re talking about Quinn Fuller (Rena Sofer) who is married to Eric Forrester (John McCook). Their May December romance was once quite strong until Quinn beginning meddling in Ridge Forrester’s (Thorsten Kaye) love life. Long story short, she manipulated and lied about Ridge Forrester’s divorce so he could marry Shauna, her bestie.

The plan called for the two women to hatch a plan to slip Ridge out of his commitment to Brooke Forrester (Katherine Kelly Lang). They succeeded and in Sin City, Shauna was the next Mrs. Ridge Forrester. Just like that.

This caused all sorts of and it was discovered that the besties cut a few corners to make their dream come true.

The plan initially worked because Quinn is a person who thinks outside of the box. She is also not afraid to kidnap amnesiac people and inform them they are someone they are not.

In other words, Quinn plays outside the line of safe boundaries, it’s just how her head works. She also has anger issues which can get ugly. In a word Quinn is unbalanced.

The Bold and the Beautiful spoilers – What Happens Next In LA?

Right now Carter Walton (Lawrence Saint-Victor) and Quinn are circling the wagons, throwing out meaningful grins and sexy stares as they talk about their mutually unfulfilled love lives. Fans think they know where this familiar plot is headed but do they really?

The Bold And The Beautiful (B&B) Spoilers: Zoe’s Army Of Love – Paris, Ridge And Quinn Gang Up On Carter https://t.co/7kpuLCY4GT pic.twitter.com/eeyKDuZnhF

Explosive show speculation divulged that Quinn may be fantasizing her interactions with six-pack Carter.

They insist that Carter would never betray Eric Forrester (John McCook), Quinn’s husband. In actuality could it be only Quinn who is seeing this theatrical production, within the confine of her own mind?

Is Quinn just dreaming about what has been happening between her and hottie boy? If that’s the case this cannot end well. Carter is her object of obsession and may not be safe!