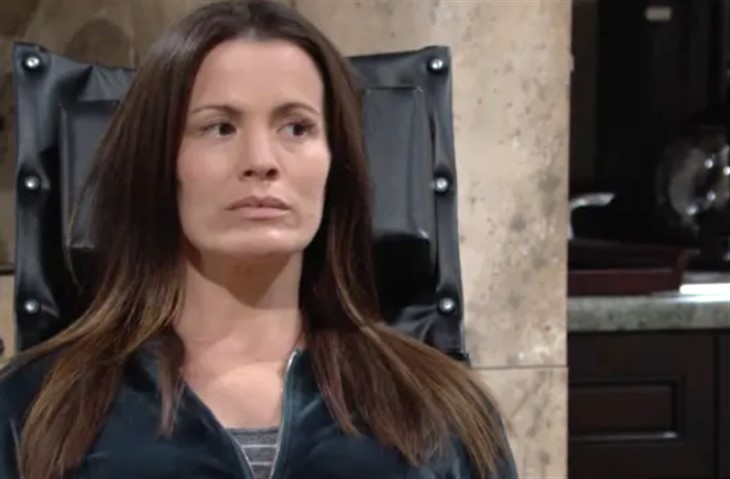 The Young and the Restless (Y&R) spoilers indicate that Chelsea Lawson (Melissa Claire Egan) will have a big decision to make.

Y&R’s favorite villain is acting smug now that she thinks she’s home free. Chelsea’s plan to poison Rey Rosales (Jordi Vilasuso) and frame Adam Newman (Mark Grossman) has gone off without a hitch. With her still pretending to recover from a stroke, nobody suspects her of any wrongdoing.

However, suspicion has now fallen on Chelsea. With the walls closing in on her, she’ll have a tough choice to make.

The Young And The Restless Comings And Goings: A B&B Star Returns To Genoa CIty

The Young And The Restless Spoilers – Victor Issues A Threat

He’s already warned her once that if she didn’t confess, he’d make sure her punishment was severe. Chelsea didn’t take Victor’s threat seriously and continued with her charade.

However, this time Victor is back with another threat, one that has Chelsea scared. Victor offers Chelsea a deal. He’ll promise not to take her son Connor Newman (Judah Mackey) away if she’ll confess.

This is a warning Chelsea is now taking seriously. Connor is important to Chelsea and she doesn’t want to lose her son. She knows Victor has the power and resources to make sure she never sees Connor again.

Chelsea doesn’t want to go to jail, yet losing Connor would be a harsher punishment.

Y&R Spoilers – Will She Confess?

Chelsea thought she held all the cards in this situation. But she didn’t count on Victor playing hardball. Victor is using Connor as leverage in his plan against Chelsea, which now has her contemplating her next move.

Chelsea knows it’s risky going up against Victor. No matter what she decides, she’ll lose either way. If she confesses she loses her freedom. But if she doesn’t she could lose her son.

The last thing she wants is Connor becoming involved in her mess. With her life spiraling out of control, she’ll have to decide how to proceed.

The Young And The Restless Comings And Goings: A B&B Star Returns To Genoa Cityhttps://t.co/DwHt9mVSeU

Although, it seems like her only option is to confess, knowing Chelsea she’ll have another card up her sleeve. In order to protect her freedom and her son, she’ll come up with a way to cover her tracks.

Chelsea played a dangerous game poisoning Rey and framing Adam. With Victor and the police breathing down her neck, Chelsea will find a lackey to take the fall.

Odds are Chelsea will frame her friend Chloe Mitchell (Elizabeth Hendrickson) for the crime. Chelsea may lose Chloe’s friendship following this ordeal, but in this case, it’s every woman for herself. To save herself and to keep custody of Connor, Chelsea will have no choice, but to let Chloe take the wrap.

The question is will her plan work or causes more damage?