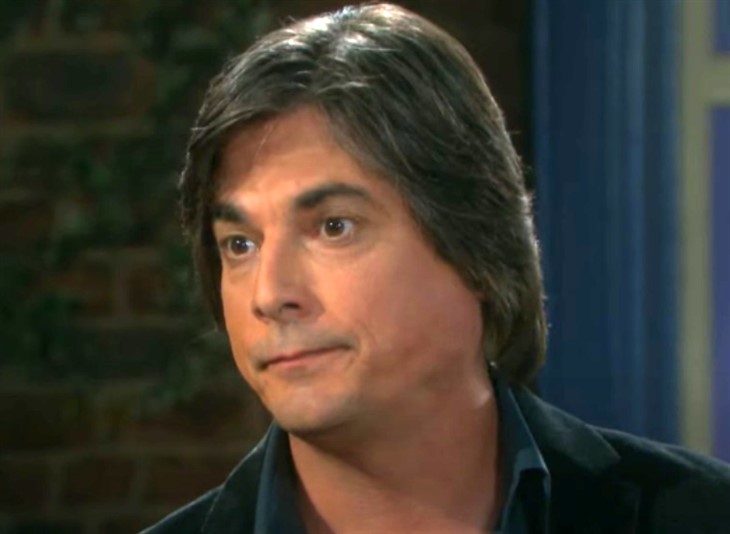 Days of Our Lives (DOOL) spoilers tease that Lucas Horton (Bryan Datillo) will unintentionally make himself Kristen DiMera’s (Stacy Haiduk) next victim in an upcoming episode of Days of Our Lives!

Days of Our Lives viewers will recall that Sami DiMera (Alison Sweeney) found herself in trouble with Kristen when Kristen as Susan Banks (Stacy Haiduk) discovered that Sami and Lucas had a one-night stand. Sami’s husband, EJ DiMera (Dan Feuerriegel) is the real Susan’s son and Kristen’s half-brother, and she blackmailed Sami into getting Chloe Lane’s (Nadia Bjorlin) away from Brady Black (Eric Martsolf)! Sami in turn tried to force Lucas into seducing Chloe, and he didn’t want to use her in that way – so he came up with an insane scheme!

Days Of Our Lives (DOOL) Spoilers: 3 Reasons An Ava And Rafe Romance Will Work

Days of Our Lives viewers will recall that he fabricated a fatal brain tumor, causing Chloe to turn into Florence Nightingale and overprotective and becoming a mother hen, even setting up an appointment with a brain tumor specialist and determining to go with Lucas to the appointment to make sure he went! Lucas had called Sami and asked her to come up with something quick, he didn’t know what to do!

Sami told Kristen about Lucas’s brain tumor scheme and Kristen wasn’t impressed; not at all! Sami told Lucas the truth about everything that led to her trying to get him to seduce Chloe – he knows that “Susan” is really Kristen in disguise, but Kristen doesn’t know that Sami told him. It may be that Kristen finds out that Lucas knows her secret and that is what will make him her next victim! She’s got leverage over Sami, but she doesn’t have any over Lucas!

Longtime Days of Our Lives viewers will remember that Kate Roberts (Lauren Koslow) is Lucas’ mother in addition to being Philip Kiriakis’ (Jay Kenneth Johnson) mother and Rex Brady’s (Kyle Lowder) mother. In all, Kate has six children. Kristen already has made Kate a victim, after Kate figured out “Susan’s” game.

Kristen has been so busy trying to cover her tracks that she slipped out of character and Kate picked up on it. Kristen then knocked her out and tied her up in the DiMera wine cellar, with plans to ship her to a Greek island, probably Stefano DiMera’s (Joseph Mascolo) in a crate like she did Sarah Horton (Linsey Godfrey)!

After the panicky situation of trying to fool Chloe and a doctor, in which Sami pulled something out of a very old bag of tricks trying to help him out of a jam, Lucas may decide that the truth is the best thing! Days of Our Lives viewers know that if Lucas tells Chloe the truth, the whole truth including busting Kristen, then Chloe will take the news straight to Brady! Kristen can’t have that, and she will make Lucas her next victim to keep Brady from finding out the truth!