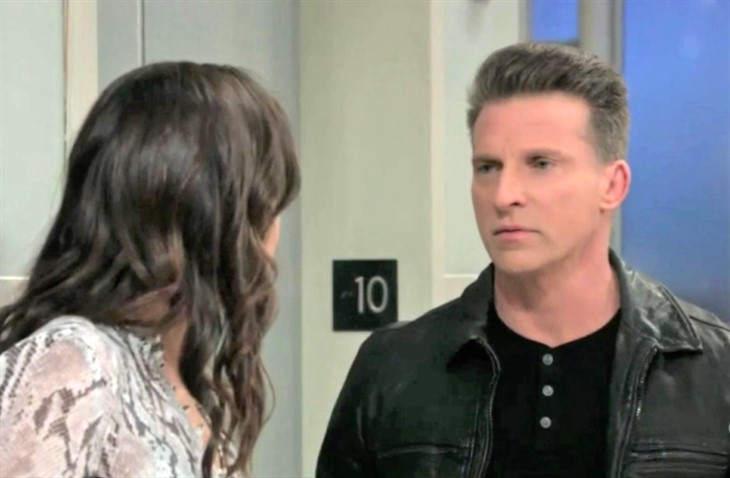 General Hospital viewers will remember that Jason was already acting protective of Britt when Carly Corinthos (Laura Wright) trying to get her to break Jason out of General Hospital in recent episodes. Jason told Carly that Britt was not going to endanger herself by her participation in such a plan, but Britt still wanted to help Jason. When a man acts protective of a woman it’s a sure sign he’s feeling close to her, and General Hospital viewers can see by the way Britt and Jason have been looking at each other that something is bound to happen between them.

Carly’s first escape plan didn’t quite go according to plan, even though she had Cyrus Renault (Jeff Kober) distracted at a family dinner at Wyndemere, where Carly, Ava Cassadine (Maura West), and Laura Collins (Genie Francis) worked together. Ava and Laura were at the family dinner along with Kevin Collins, (Jon Lindstrom) Cyrus’ brother Martin Grey (Michael E. Knight), and Nikolas Cassadine (Marcus Coloma). In spite of Cyrus himself not being at General Hospital, Carly’s original escape plan for Jason hit a snag when

Port Charles Police Commissioner Jordan Ashford (Briana Nicole Henry) questioned Brick (Stephen A. Smith) as he sat in his car ready to drive Jason away! Britt does manage to get Jason out of General Hospital, and other General Hospital spoilers say they flee to Canada – possibly with the help of other family and friends!

General Hospital viewers will see Jason and Britt grow closer on the run, but the seeds of romance were clearly planted while they were still in Port Charles. Going through stressful situations together can bring people closer to one another, or they can tear them apart. That is what happened to Jason and Samantha Morgan (Kelly Monaco). It was different when Jason and Sam didn’t have children – she didn’t have to worry about their lifestyle putting them in danger. As it is, Danny Morgan (Porter Fasullo) and Emily “Scout” Cain (Ella Ramacieri) live at the Quartermaine mansion half the time anyway, and that certainly does seem safer than living in Jason’s penthouse, even though Sam still lives there!

General Hospital (GH) Spoilers: Who Will Shawn Get into a Relationship With? Vote Now! https://t.co/irgkw9EBdb

It would seem after the years wore on that Sam just grew tired of the violence herself, and after several years of relative calm she couldn’t handle it when Hurricane Cyrus blew into town. So now as Jason and Britt are going through danger together they are growing closer. Jason has noticed Britt’s shaky hand, and she has made several remarks that have led some fans to think that possibly she has a terminal disease. Britt’s mind will go to Huntington’s Disease whether she has actually been tested for it or not, which can be fatal, but look how long her father, Cesar Faison (Anders Hove) may have had it.

It wasn’t even diagnosed until his autopsy and Kevin Collins wanting to study Faison’s brain. Britt’s shaky hand could be a symptom of other diseases, it could simply be an essential tremor caused by stress, or it could be Parkinson’s Disease, which takes many years to kill someone. Jason will worry about Britt while in Canada and make sure that she is properly tested. If that’s not loved, what is?