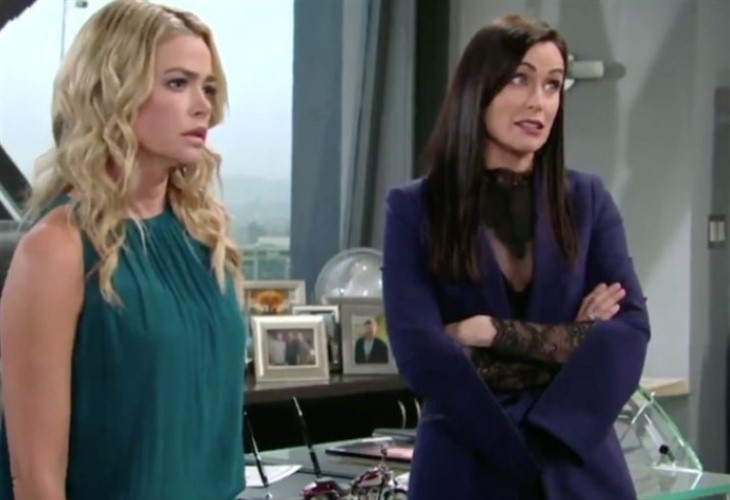 The Bold and the Beautiful (B&B) spoilers document that Quinn Fuller Forrester (Rena Sofer) knows that her latest mistake will be a marriage killer if it’s ever revealed. Of course, this is daytime, so the percentage chance that Quinn and Carter Walton’s (Lawrence Saint-Victor) connection will remain an eternal secret is likely zero.

Eric Forrester (John McCook) has entered another period of disillusion with Quinn. He still loves her but maybe concluding that she will never truly change. His instincts indicate that Queric can’t work and is living through its last days. And this was his attitude before he projects as learning about Quarter (Quinn and Carter’s mashed nickname).

Shauna Fulton (Denise Richards) will again prove influential in this next period of Eric and Quinn’s marital strife.

The Bold And The Beautiful Spoilers – Ridge Forrester Represented A-Line

Ridge Forrester (Thorsten Kaye) isn’t Eric’s biological son. But his adopted status makes him no less a part of his family than any of Eric’s genetically connected offspring in the mind of McCook’s character.

The above heartfelt thought is what made Ridge’s emotional connection with Quinn so hard to take in the latter part of the last decade on B&B. Quinn kissed Ridge while married to Eric. That was wrong on many levels and opened a betrayal window that has never fully closed.

Carter has known the Forrester’s for years. He was introduced as Marcus Forrester’s (Texas Battle) adopted brother in 2013.

Saint-Victor’s character became legal counsel at Forrester Creations and has officiated at many Forrester weddings. Eric, Ridge, and the rest of their family fully trust Carter, with his recent elevation to FC’s Chief Operating Officer and seat on the Board of Directors further affirming his respected status.

It’s very disappointing that Carter allowed what was a brief romantic connection with Zoe Buckingham (Kiara Barnes) to totally disrupt his judgment. He let down all of the people who showed him friendship and offered professional respect.

The Zarter betrayal is the direct reason why Carter chose to cavort with Quinn. But it won’t stand as a reasonable explanation for his actions or serve as protection for resulting consequences.

Shauna acted in a selfless manner that was in the best interests of her friend, Quinn when helping to repair Queric a handful of months ago. That effort was needed after their ill-fated attempt to break Bridge, which included a phony Shidge marriage in Las Vegas, Nevada.

Quinn will confide in her longtime friend and then hope Shauna can massage Eric’s senses once more. But Richards’ character will be well behind the eight balls in this storyline that involves Eric’s marriage, rather than his son’s.