The Young And The Restless (Y&R) Spoilers And Rumors: Nick & Adam Mend Fences As A Result Of Their Close Call? 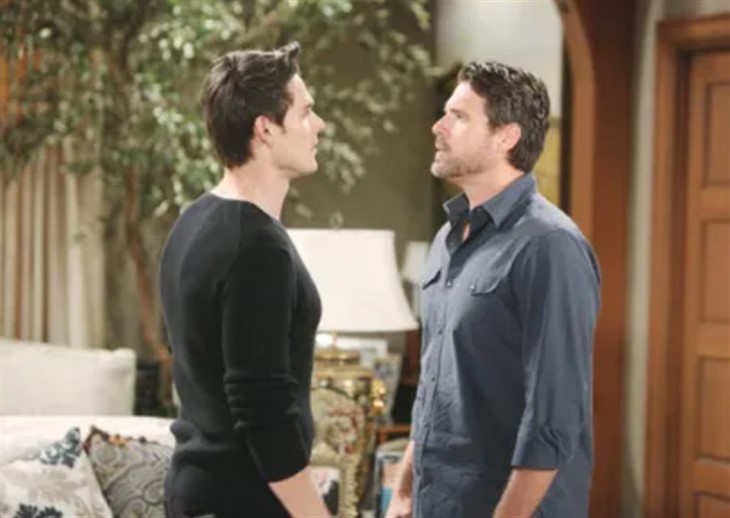 Viewers of The Young and The Restless will recall that Adam and Nick, after quite a bit of squabbling, seemed to come to a meeting of the minds as the storms raged overhead. Nick found a pair of outside cellar doors leading to the yard which he figured may have been easier to break through than the door at the top of the stairs to the kitchen, which was obviously blocked. Adam and Nick had used a large post, one of several sitting in that basement, as a battering ram but were unable to get the door to budge.

Viewers of The Young and The Restless will recall that the basement did have some windows, reinforced with rusty iron grates which Nick wasn’t able to remove either. Amongst all the protests from Nick that they needed to ignore the dangerous tornadic storms outside and get to the Newman jet so they could fly back to Genoa City, it was plain Adam cared enough to warn Nick that the weather was too dangerous. Chances are, the Newman jet had already flown away powered by the tornado after all!

After Nick tried a minor guilt trip on Adam to get him to come back with him to donate a kidney to Faith Newman (Reylynn Caster) by asking him how he would feel if it was Connor Newman (Judah Mackey) who needed a transplant, Adam softened a little. Nick acknowledged that he knew that Adam is, if nothing else, a good father who loved his child, and he and Nick did have that in common!

Amidst Adam’s warnings that Kansas tornadoes are nothing to play around with, he softened a bit and admitted that he wanted a second chance, and he’d done a lot of thinking while he had been hiding out in that basement. The thing that struck Nick and got his attention was Adam’s wanting a magic pill to turn him into someone his son would be proud of, and wishing he could go back and do things differently in his life. Viewers of The Young and The Restless could tell that Nick was taking to heart the things that Adam was saying, and promised Adam he wouldn’t turn him in and would help him escape, if necessary, after donating his kidney.

The Young And The Restless: Justin Hartley And Sofia Pernas’ Romance – 5 Things To Knowhttps://t.co/WHwXs8MbxL

The two had definitely made a breakthrough in their relationship with each other and Adam resolved to take the necessary steps to save Faith’s life. The only problem was the raging storm outside, even though together they were able to push the outside cellar door open amidst the creaks and cracking noises of the farmhouse above them. Nick should have taken a clue from those noises that something dangerous was about to happen from when his club, The Underground’s roof collapsed and trapped several people!

As Nick and Adam prepared to try to leave the basement, all of a sudden Nick saw the roof of the basement start to collapse and pushed him out of the way; however, Adam was left unconscious among the rubble, with Nick looking down and begging Adam not to die on him now! It sounds like the two half-brothers have come to a meeting of the minds and the hearts.