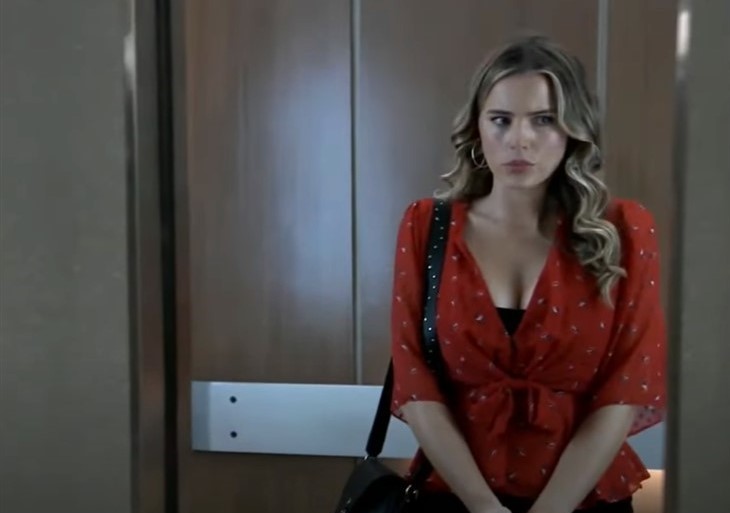 General Hospital (GH) spoilers tease that Sasha Gilmore (Sofia Mattsson) could be seeing a doctor at General Hospital because she has heart damage from the overdose that nearly killed her several months ago courtesy of Cyrus Renault (Jeff Kober).

General Hospital viewers will recall that Sasha seemed nervous when Brando Corbin (Johnny Wactor) talked to her at the hospital in a recent General Hospital episode. The two of them had started off on what seemed to be a very passionate romance one night in a jeep that he was repairing in his auto repair shop, that previously had been Jason Morgan’s (Steve Burton) motorcycle repair shop. Sasha and Brando encountered each other in the General Hospital elevator, and as the two rode down to the next floor she was extremely nervous. Brando had wanted to know why she was there and she told him she had a doctor’s appointment.

Since she had no reason to hide a visit to check up on Detective Harrison Chase (Josh Swickard) or offer support to Willow Tait (Katelyn MacMullen) which is what she did after Brando left with his boss, Cyrus, it can be safely assumed that she encountered Brando on her way from the appointment. Some General Hospital fans thought perhaps that Sasha had found out she was pregnant from the encounter with Brando, but the timeline is no wrong.

It had only been a couple of days since that hot night in the backseat of the jeep! That would be way too soon for a pregnancy even to be suspected! However, Sasha did seem to be worried about proceeding any further with Brando in what promised to be a potential long-term relationship – could something be wrong with Sasha?

General Hospital viewers will remember several months ago when Sasha nearly died of a major heart attack after receiving the overdose cocaine mix from Cyrus. They had been eating dinner at his apartment and then she collapsed after taking the hit. Brando had already started working for Cyrus as a driver and also as a double agent of sorts, reporting back on Cyrus’ activities to Sonny Corinthos (Maurice Benard) and Jason Morgan (Steve Burton). Cyrus told Brando to dump Sasha somewhere where her body would be found in a few days, down at the pier or somewhere where drug addicts hang out. But Brando wouldn’t do that – he took her to General Hospital where she got immediate treatment, and her life was saved – but she spent several days in intensive care.

General Hospital (GH) Spoilers: Britt Opens Up To Jason About Her Medical Conditionhttps://t.co/r2ts9M60Bl

That was the first clue that Brando felt something for Sasha. Cyrus didn’t like his good-guy attitude even though Brando didn’t implicate Cyrus in any way or tell anyone where Sasha had collapsed. She did that herself after she was awake and strong enough to do so! But with a major heart attack like that, there is a good chance that it did permanent damage – perhaps giving her heart symptoms after her jeep romp with Brando! Chances are, if she just found out at the doctor’s appointment that sex is risky for her because of the heart damage, no wonder she seemed jumpy and evasive with Brando as they talked in the elevator!