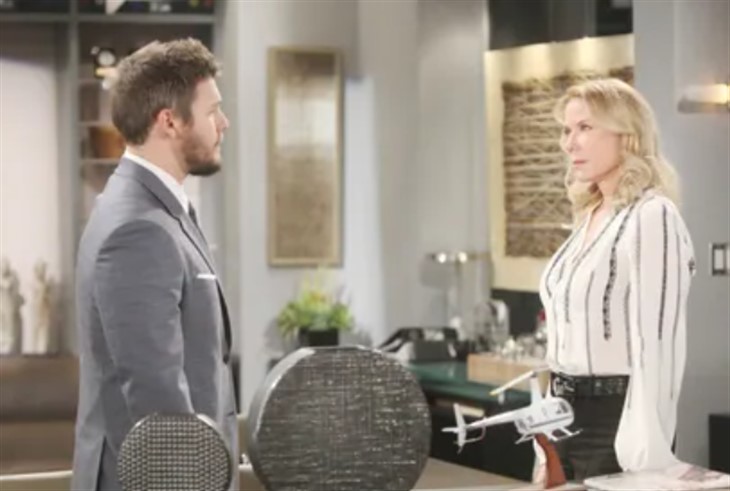 The Bold and the Beautiful (B&B) spoilers document that Brooke Logan Forrester (Katherine Kelly Lang) has long believed that Liam Spencer (Scott Clifton) is the right man for her daughter. Her quick dismissal of his actions with Steffy Forrester (Jacqueline MacInnes Wood) didn’t seem like the type of choice a loving mother would make. But Brooke sees Liam as the alternative to Thomas Forrester (Matthew Atkinson).

Hope Spencer (Annika Noelle) didn’t instantly forgive Liam, like her mother. She needed time to process his latest reconnect with her nemesis. Then, Hope patiently waited for the paternity test process to play out. Vincent Walker (Joe LoCicero) intervened, which tied into his demise.

The Bold And The Beautiful Spoilers – Brooke Logan Forrester Is A Relationship Expert?

As is true of many legacy characters on B&B and across the soap world, relationship success is a subjective assessment. More than one hand is needed to count Brooke’s marriages to different leading men. Fans also need more than one hand just to count her marriages to Ridge Forrester (as originally played by Ron Moss and now by Thorsten Kaye).

So, she surely is experienced in being married. Brooke has chosen the right man on occasion, with Ridge surely being her top choice and enduring soul mate. But Lang’s iconic alter ego is hardly the best source on who anyone else should be married to.

Liam was desperate to tell Hope what happened with Steffy at the cliff house. He did that, which produced expected drama.

However, his accidental hit of Vinny isn’t something that Liam wants Hope to know. He sees the withholding of that information as a form of protection.

Clifton’s character is more concerned about informing the authorities, believing that he’ll inevitably be arrested if he doesn’t come forward. But his father, Bill Spencer (Don Diamont), has Liam’s conscience contained for now. So, their secret persists.

The Bold And The Beautiful Spoilers – Hope Spencer Willing To Forgive Again?

Indiscretions with Steffy represent experienced history. Hitting Vinny and then not reporting his death is totally different.

It will be interesting to see if Brooke still backs Liam’s place as Hope’s husband after this reveal happens. The connection to another love of Brooke’s life, Bill, will likely play into her stance.

Hope has been willing to accept Liam’s faults. But the coming reveal will test Lope’s ability to exist, with Hope holding the decision-making card.