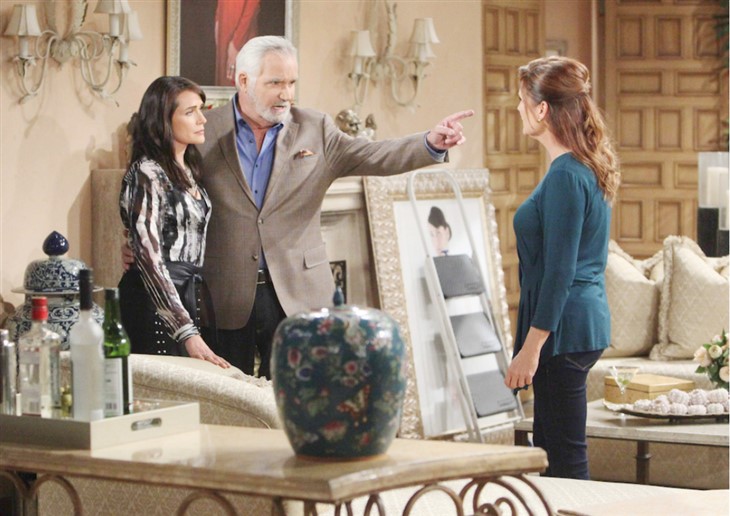 The Bold and the Beautiful (B&B) spoilers indicate that Sheila Carter (Kimberlin Brown) could be making a return to Los Angeles.

Actress Kimberlin Brown posted a vehicle pass from the B&B set on Instagram. Her post is creating a lot of buzzes that her character could be returning to stir up trouble.

Sheila was last seen in March 2018 when she tried to break up Eric Forrester’s (John McCook) and Quinn Fuller’s (Rena Sofer) marriage. Her plot backfired, and shortly afterward she disappeared.

But now she may be making her presence known again. So who will Sheila be targeting upon her arrival in Los Angeles?

The Bold And The Beautiful Spoilers – Eric Forrester And Quinn Fuller

Sheila’s desire to reunite with Eric was her primary focus during her last appearance. She attempted to create dissension in Eric and Quinn’s marriage. However, her plan didn’t work.

Yet, that doesn’t mean Sheila has given up. Although it’s been years, Sheila’s love for Eric hasn’t gone away. With Eric and Quinn having marital problems, this is the perfect time for Sheila to come back.

Unbeknownst to Eric, his wife is beginning an affair with Carter Walton (Lawrence Saint-Victor). Sheila could discover Quinn’s tryst and expose it for everyone to see. Then she’d slide in and make her move on a vulnerable Eric.

Another reason for Sheila’s surprise return could be that she’s related to a newcomer. Dr. John “Finn” Finnegan (Tanner Novlan) is B&B’s hottest new character. As Steffy Forrester’s (Jacqueline MacInnes Wood) fiancé he’s won over the audience. However, that may change when his mother’s identity is revealed.

Rumors have swirled that Finn’s mother is someone from the show. Of course many have speculated that it’s one of B&B’s current leading ladies. But it’s possible his mom could be a past character.

Finn being Sheila’s son would be a huge shocker and would generate lots of drama. Finn has won the approval of Ridge Forrester (Thorsten Kaye) and the rest of the family. Yet, Finn being the son of the Forresters’ nemesis could have Ridge changing his opinion on the doctor.

Sheila has caused a lot of pain for the Forresters throughout the years. They thought they were finally free of her, yet she found a way to come back into their lives.

The Bold And The Beautiful Rumors: Quinn Forrester Pregnant With Carter’s Miracle Baby?https://t.co/d2XajX4ADq

This revelation is going to cause major turmoil for Finn and Steffy. The couple has been happy since their engagement and finding out they have a baby on the way. But the drama’s going to rear its ugly head when Finn’s past is revealed.

Steffy’s heard the stories about Sheila and there’s no way she’ll want her future mother-in-law around her kids. Yet, Finn is going to be adamant about having Sheila in their lives.

With Steffy trying to push Sheila out of their lives, this is no doubt going to upset Ms. Carter. Steffy will be her new nemesis and Sheila will get revenge on the woman trying to come between her and her son.

No matter what’s in store for the character, fans are excited about Sheila’s return.