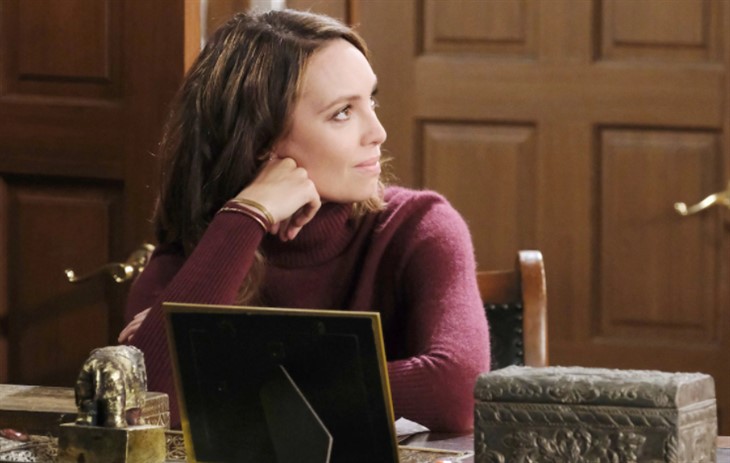 Days of our Lives (DOOL) spoilers tease that Emily O’Brien’s character Gwen Rizczech is a very twisted lady. She came to town to wreck her bio family and did a bang-up job. She busted up her father Jack Deveraux’s (Matthew Ashford) union with Jennifer Deveraux (Cady McClain) and she tried to chem fry her sister Abigail DiMera’s (Marci Miller) brain.

Later she had red hot monkey sex with Abi’s husband Chad DiMera (Billy Flynn), got pregnant, and now accuses Abi of causing her to lose her unborn baby.

O’Brien recently dished some inside dirt on her DOOL situation and we have some of the juicy details.

When she was asked how Gwen feels about driving a wedge between Chad and Abi she said, “Chad can see how much pain and stress Gwen is going through, and what she’s experienced with the miscarriage and the fall.”

“Her reaction is that she felt validated. She needed that, even though she knew it was wrong.”

O’Brien also let spill some inside gossip on Gwen’s nasty motivation saying, “She’s just looking for somebody to blame. She’s had misfortune after misfortune, and she’s alone.”

“Gwen has put everything onto Abigail because she looks at her as the person who gained everything in life that she didn’t. It’s an easy target to put it all on, Abigail.”

DOOL Spoilers – What Happens Next For Gwen Rizczech?

You may be shocked to learn what Gwen is up to next! According to O’Brien, her character eventually sees the light about her vindictive streak and decides to focus on someone other than Abi.

Of Abi, she says, “That is over for her. She’s realizing that has to stop. Her ultimate motivation and her only core objective after the miscarriage is to strengthen her relationship with the one family member she has who she trusts, and that is her father … She does not want to sabotage that in any way.”

Still, Gwen will not come entirely clean about her miscarriage, which happened before the fall.

DOOL Spoilers – What Happens Next In Salem?

So how does Gwen rationalize her lie? O’Brien says that “That secret is looming over her head. She does start to realize that she’s made a mistake because she does want to be able to gain a relationship with her father… She does start to feel some major remorse. She has to carefully and tactfully find a way to reveal [the truth about the miscarriage] without ruining her relationship with Jack.”

Will Gwen actually change her stripes? Tell us what you think DOOL fans!