The Young And The Restless (Y&R) Spoilers And Rumors: Kyle’s World Turned Upside Down – Has To Raise Son? 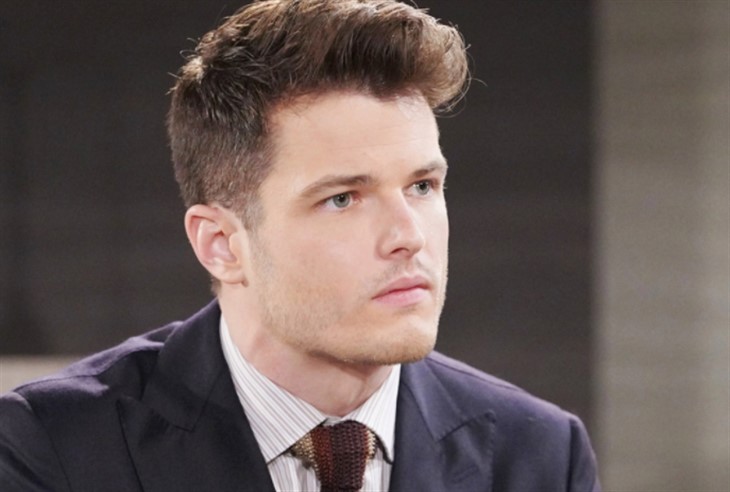 The Young and The Restless (Y&R) spoilers tease that Kyle Abbott’s (Michael Mealor) world will soon be turned upside down! Will he find out in upcoming episodes of The Young and The Restless that he will have to raise his son with Tara Locke, (Elizabeth Leiner) because her and Ashland Locke’s (Richard Burgi) plane went down and Tara revealed Harrison Locke’s (uncast) paternity in her will?

Viewers of The Young and The Restless will recall that although Kyle told his fiancée Summer Newman (Hunter King) about Harrison, he never told his father Jack Abbott (Peter Bergman). That could be because Kyle and Summer would not be prepared to share custody or fight for it with the likes of Ashland Locke and of course, Tara didn’t want Ashland to know about her and Kyle’s affair. Ashland had a major heart attack, which Summer’s grandfather Victor Newman (Eric Braeden) took advantage of to force him to sign Cyaxeres Media back to him! After Ashland recovered sufficiently to go back home, Tara having mentioned he needed a pacemaker, Tara called Kyle to meet with him briefly before they flew back to New York City.

It was to say goodbye but also to send him a little present on his phone – a photo of Harrison. Viewers of The Young and The Restless will recall that Kyle’s heart visibly melted and he told her the little guy was the cutest thing he’d ever seen, with golden curls and looking like a mini-me of himself. That response wasn’t lost on Tara. She positively beamed! The little guy was back at home in New York City while Tara and Ashland were in Genoa City, with Tara having called and talked to him on the phone several times with obvious affection. Tara had wanted to make sure before she left to go back to New York that Kyle had a better photo of Harrison than the blurry one he had found online.

Viewers of The Young and The Restless know that nothing would turn Kyle’s world upside down more than to suddenly be forced to take custody of a child that the rest of his family, other than Summer, even know he has! Longtime viewers of The Young and The Restless will remember that Jack went through something similar years ago before Kyle was even born when his Vietnamese girlfriend Luan Volien (Elizabeth Sung) showed up in Genoa City and Jack found out they had a son, Keemo Volien Abbott (Philip Moon) who was now grown and back in Vietnam. Luan sadly died but Keemo and his sister, after coming to Genoa City decided to leave town after Luan died. Jack and she had been married a short time. Jack, of all people, would certainly understand Kyle’s dilemma.

Summer’s family is having another situation that could indirectly impact the Lockes and Kyle – even though Wisconsin should be a straight shot across the Great Lakes to New York City by plane, weather systems, and in particular storm systems, have a way of traveling across different parts of the United States and sometimes in strange directions, such as when a hurricane may come inland and wreak all kinds of havoc. Down in Kansas, Summer’s uncles have been trapped by a tornado as her half-sister Faith Newman (Reylynn Caster) needs an emergency kidney transplant!

Nick Newman (Joshua Morrow) is bringing Adam Newman (Mark Grossman) back to donate a kidney to Faith. What if that same tornadic system decides to head northwest as Locke’s plane is on the way to New York? Any plane could be brought down by a storm system like that! Kyle could receive word that Ashland and Tara’s plane went down and there are no survivors, and Tara named him in her will to raise Harrison!