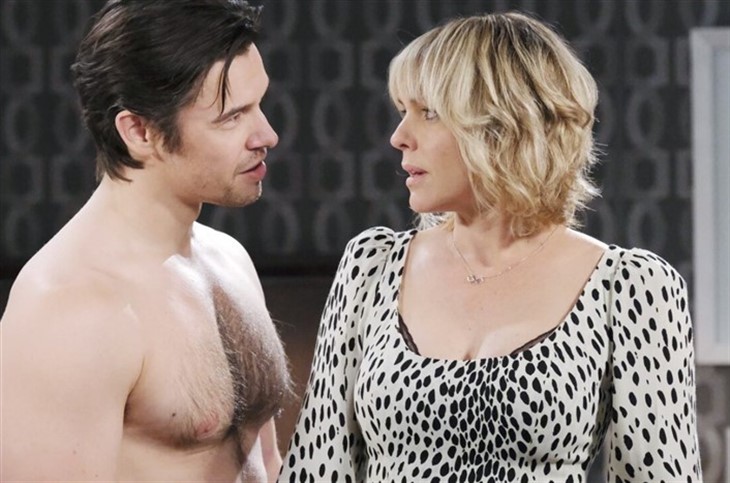 Well, well, well. What do we have here? Days of Our Lives (DOOL) spoilers say that Nicole Walker (Arianne Zucker) is going to find herself absolutely horrified and embarrassed after realizing that she’s done something incredibly regretful. The beautiful blonde will hook up with Xander Cook (Paul Telfer) only finding herself feeling awful about it afterward. Here’s what you need to know.

After Eric contacts Nicole and tells her that he won’t be coming home for some time to come, this sends her over the edge. He says that he’s going to be gone for several months with this next excursion but according to Nicole, that’s not what she signed up for. Even though Nicole has been very understanding and knows what Eric loves what he does, she’s also feeling that huge void he left behind for her.

So, what does Nicole do next? She does what any lonely woman would do in her situation and that is, hit the bottle while drowning her sorrows at the Brady pub. That’s where she runs into Xander.

Arianne Zucker, who plays Nicole Walker on the hit show, puts it this way to Soap Opera Digest in a new interview, “She’s really sad and hurt and angry, and she goes to the pub and she ends up wallowing her misery, and he’s in his own misery and plus b equals c. Two people just commiserating together and finding a strange common ground, which is really the alcohol, but also the sadness.”

Nicole and Xander end up sleeping together, and the next morning Nicole gets some clarity. Unfortunately for her, she can’t turn back the clock once she realizes the mistake that she made. Arianne adds, “From the second she wakes up and sees him, she knows it’s the biggest mistake she’s ever made. She’s just devastated and so embarrassed for herself.”

Needless to say, fans will have to tune in this week to find out what will happen next! Days of Our Lives airs weekdays on the NBC network. Check your local listings for times. Are you a fan of daytime television? Be sure to catch up on everything happening with Days of Our Lives right now. Come back here often for all the latest Days of Our Lives spoilers, news, and updates.