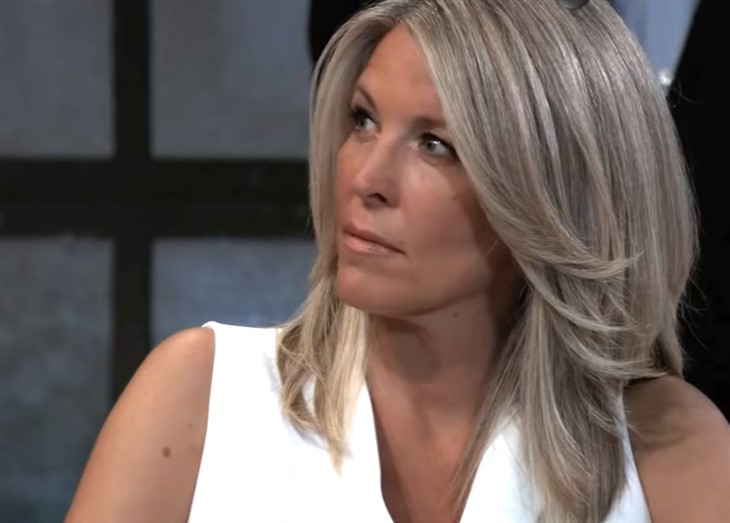 General Hospital (GH) Spoilers tease that Carly Corinthos (Laura Wright) had no choice but to assume control of her husbands’ criminal empire in front of the other mob-related families to prevent Cyrus Renault (Jeff Kober) from being able to infringe on the territory long held by Sonny Corinthos (Maurice Bernard). Now with Sonny believed to be dead, someone had to step up and take control. Carly had planned for Jason Morgan (Steve Burton) to take on that role. But fate had other ideas.

Even though Franco Baldwin (Roger Howarth) was murdered by Peter August (Wes Ramsey), the fact that Jason was seen kneeling by Franco’s body only moments after he was shot as well as the hatred that Jason has always had for Franco made Jason the prime suspect in the murder case. But when Gladys Corbin (Bonnie Burroughs) lied to the police that she witnessed Jason dispose of a gun right after the shooting, a gun that when found was confirmed to be the murder weapon convinced a judge that Jason should be held in Pentonville without bail until the trial date. Gladys was paid by Cyrus to lie that she saw Jason in order to keep Jason from attending a meeting between the mob families.

GH Spoilers – Carly Corinthos Knows That She Needs To make sure that the Corinthos Organization doesn’t look weak.

Cyrus had planned to appeal to the five families to take over Sonny’s territory. Knowing Jason needed to be at that meeting, Carly arranged for Jason to be stabbed by Shawn Butler (Sean Blakemore) with a minor injury so Carly could stage an escape for Jason at the hospital where there would be less security to have to overcome. Dr. Britt Westbourne (Kelly Thiebaud) Chief of Staff at General Hospital, was in on the plot and did as much from her end as she could. Jason had advised his new ally to be far away from General Hospital when the escape was planned to take place. But Britt didn’t make it out of the hospital because she was accosted by two of Cyrus’ men with the order to kill her and make it look like an overdose.

But Jason was unaware that Britt was in danger as he made he was to the parking garage where a ride would be waiting. But that’s when Jason realized that Britt’s car was still there, meaning that something wasn’t right. Jason rushed back to Britt’s office and saved her. But with her life in danger now, she would have to go with Jason. They made it back to the parking garage but just as they were about to get in the car, someone shot Jason in the back. Once they got to the safehouse, Britt was able to keep Jason alive, but he wouldn’t be able to attend the meeting with the five families. So Carly did the only thing she could do; she attended the meeting herself meaning that now she was in charge of the mob in Port Charles.

GH Spoilers – Carly Corinthos Claims That Jason Morgan Will Return To The leadership Role When He’s Able But Does She Have No Plans To Give Up Her Newfound Power?

This isn’t the first time Carly has made a decision for Sonny’s organization in recent weeks. Learning from Laura Collins (Genie Francis) that Cyrus’ mother was at a long-term care facility as she has gotten older, Carly had the elderly woman was taken from the facility she was in and to keep Cyrus from attacking her family in order to take over. The plan worked and Cyrus remained in check for several weeks, but even Jason let Carly know that she crossed a line by kidnapping an elderly woman. What this likely means going forward is that any rules, either written or assumed will be thrown out the window. Carly will exactly what she wants and she isn’t afraid to do anything she has to as Cyrus is still a threat. The night of the meeting with the five families, Carly apparently had one of Cyrus’ shipments destroyed in order to assert her power.

Now that Carly is in charge and Cyrus was prevented from taking over the Port Charles territory, Cyrus will likely become as dangerous as he ever was. Most likely, he will try to get some sort of leverage on his newfound sister, Laura Collins (Genie Francis). Since Laura is Port Charles’ mayor, she has the ability to make like easier for Cyrus by granting certain favors. Laura would never do that unless forced, so perhaps he will threaten Lulu Falconeri (Emme Rylan) or even take her from her long-term care facility. Whatever the case, Cyrus will certainly become more deadly.

GH Spoilers – Carly Corinthos Is Currently Unaware The Her Husband Sonny Corinthos Is Alive But Suffering From Amnesia A Couple Hours Away From Port Charles.

So look for Carly to remain in charge as time goes on. She will likely grow to enjoy her newfound power so things will become even more complicated once she finds out Sonny Corinthos is actually alive. Sonny currently is suffering from amnesia but sooner or later he’s going to get his memory back and will return home. Of course, he will expect to resume his role as Mob Boss but will Carly really want to give up her position? This could be the beginning of a huge shift in dynamics in Sonny and Carly’s relationship. Can their marriage survive once everything is said and done?

Will Carly remain in her newfound position even when Jason is able to return? Will she go on a power trip and continues her game of cat and mouse with Cyrus? And how will Sonny feel about Carly stepping up the way she did? Sometimes our destiny isn’t at all what we expected, and Port Charles is no different, so stay tuned to General Hospital airing weekdays on ABC. And don’t forget to check back right here regularly for all your General Hospital news, information, and spoilers!