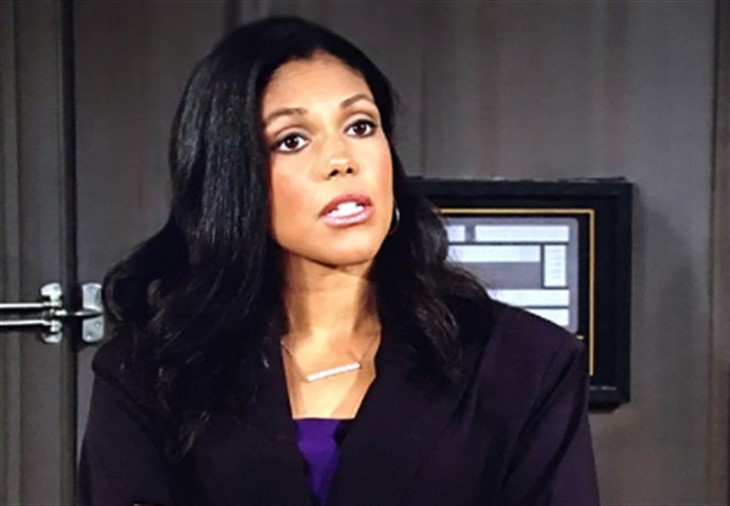 The Young and the Restless (Y&R) spoilers document that Amanda Sinclair (currently played by Karla Mosley) doesn’t want the world to know that she is Sutton Ames’ (Jack Landron) granddaughter. That fact isn’t pertinent to the case at hand or so Amanda thinks.

An attempt is being made to tie Victor Newman (Eric Braeden) to the murder of Richard Nealon (no actor known to be cast for this retrospective role). The implication is that Amanda’s just discovered, late father knew information that linked Newman Enterprises to apparent bribery. That knowledge is said to be the cause of Richard’s early demise, with the killer not yet having been conclusively identified.

The Young And The Restless Spoilers – Richard Nealon Remains Covered

Richard is a shadowy figure because he died approximately 30 years ago. His death was thought to have resulted from a car accident. But Naya Benedict’s (Ptosha Storey) tells to Amanda opened a mystery storyline.

Naya’s father is being accused of ordering Richard’s murder. That is said to have happened because of the information Newman Enterprises’ one-time accountant found, which apparently proved that Sutton was paid off in return for making government intervention disappear.

Amanda seems to have been swayed by the emotions connected to finding her biological mother, rather than the facts of this case. She currently has no evidence that vindicates Sutton, yet is convinced of his innocence.

The setup implies that Sutton could be wrongly accused, with Amanda using the opportunity Naya and he offered her to form a family bond. However, if Sutton is guilty, then Amanda will be in the untenable position of defending a blood relative who is acting with purposeful intent.

It could be that Immani Benedict (Leigh-Ann Rose) was sincere in warding Amanda off this case. However, Rose’s character came on so strong during the initial encounters these half-sisters had that Amanda isn’t putting stock in what Immani is saying now.

The Young And The Restless: 5 Things You Need To Know About Chloe Mitchell’s Mental Health Issueshttps://t.co/yz1mbzHpOf

The Young And The Restless Spoilers – Victor Newman On The Attack

Victor does not play defense. As is true of his chess matches, he is always on the attack. The Moustache is always many moves ahead, as all master players are.

So, despite Amanda’s information advantage viewers anticipate Victor will learn what her connection is to Sutton. The founder of Newman Enterprises is also sure to learn what Richard knew and what happened to him.

By the end of this storyline, Amanda could even be helped by Victor, if he and his people help to shed light on her father’s life and its ending.