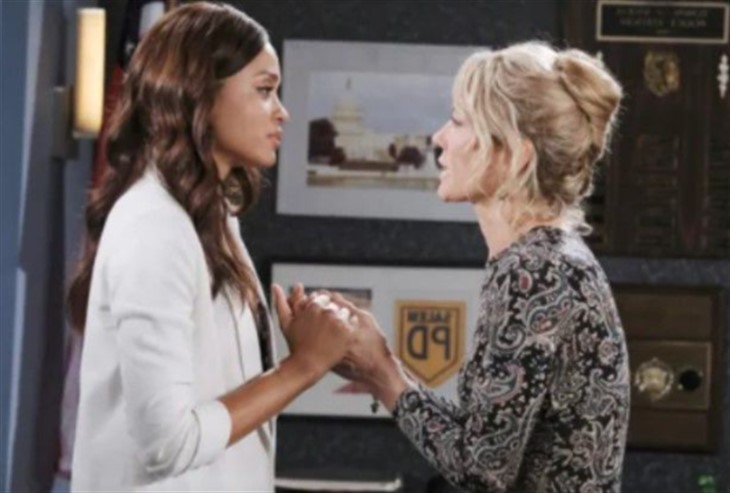 Days of Our Lives (DOOL) spoilers suggest that Lani Grant (Sal Stowers) will once again come face to face with her friend, Kristen Dimera (Stacy Haiduk). Will Lani let Kristen go once again?

Days of Our Lives Kristen and Lani become close when they both left town to join the convent a few years ago. Kristen and Lani bonded over their lost loves, Brady Black (Eric Martsolf) and Eli Grant (Lamon Archey). However, both women returned to Salem and cast their claim on their men. Since then, Brady and Kristen had reunited until she tried to kill Victor Kiriakis (John Aniston) and Lani married Eli and they have twin babies.

Kristen pled guilty to stabbing Victor to keep Lani out of prison. As for as Kristen is concerned, Lani owes her and she will play on her guilt once again. Unfortunately, Lani probably isn’t going to risk her career a second time to save Kristen. Lani has already risked her happiness more than once.

DOOL Spoilers – Kristen Dimera Wants To Be Near Brady Black

Days of Our Lives Kristen broke out of prison to be near Brady. Kristen knows that Brady was shot some time ago and traded places with Susan Banks (Stacy Haiduk) to get back to him after turning herself in. However, Kristen is risking new charges and Brady is trying his best to find her. Kristen has accidentally caused Brady to crash his car. Now that she has placed Brady in danger, you would think she would turn herself in. However, instead of doing the right thing, Kristen is going to put herself in the position where her friend may have to arrest her again. Will Lani look the other way this time?

Days of Our Lives Kristen must know that Lani cannot put her career on the line again. The last time Lani covered for Kristen she almost went to prison herself Lani also almost lost her husband to keep Kristen’s secret only to be betrayed by her husband in the end. Lani had hoped that Kristen could listen to reason when it came to her arrest. Unfortunately, Kristen hasn’t learned anything and Lani needs to be a cop instead of Kristen’s friend. Can Kristen forgive Lani for no letting her get away this time?

Kristen is going to need someone to protect her from the district attorney as well. If the truth comes out about Kristen’s escape, Melinda Trask (Tina Huang) would throw the book at her. Can Kristen understand Lani’s decision?