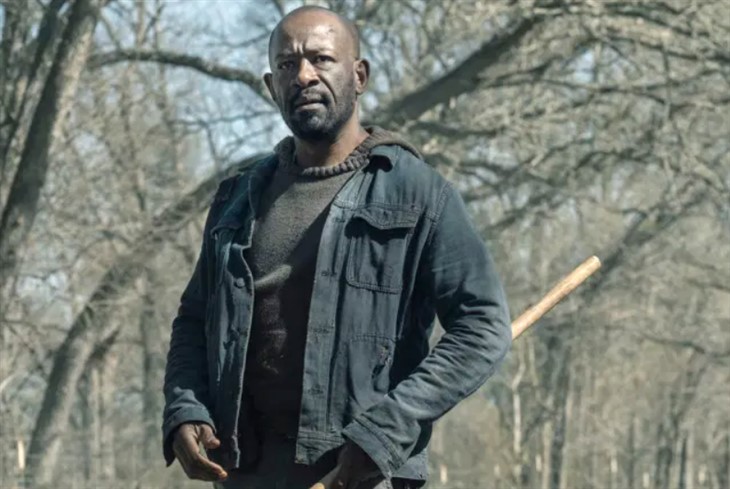 Fear The Walking Dead showrunner Ian Goldberg has promised fans will see a fresh style for the remaining episodes of the show’s sixth season.

Just like any other production, the long-running spin-off of “The Walking Dead” struggled with production delays due to the pandemic opting the show bosses to split its season six into two. The showrunners of the post-apocalyptic horror television series gathered recently via zoom in an interview with EW looking ahead for part 2 of the current The Walking Dead season.

“Honestly, next week’s episode is truly unlike anything we’ve ever done on the show. Just conceptually it’s very far outside the box of what you’ve seen on Fear The Walking Dead to this point,” Goldberg teased.

Since “Fear the Walking Dead” premiered in 2020, fans have been seeing the mysterious group who promise “the end is the beginning” through their graffiti and slogans.

The latest episode on Sunday titled “The Holding” introduced the mysterious group in full to viewers. Heading the community is their charismatic cult-like leader, Teddy (portrayed by John Glover) acting as the newest villain in town.

On Another Adventure For Love

Alicia, Luciana, Althea, and Wes went on a risky mission. Acting as wanderers who needed rescue, they penetrated the underground headquarters. They have gone as far as discovering maps and plans of taking out Virginia’s communities and more.

On top of those, Al and Wes found drop site maps for the CRM in the bunk owned by Derek, Wes’s long-lost brother. Their latest discovery on Fear The Walking Dead indicated that the helicopter landing on the roof which was piloted by Al’s potential love interest, Isabelle, was the target and not the inhabitants in the office building previously shown in the season’s beginning episode.

“And I think on a more personal level, what it does for Al is it makes her realize that she’s got to act, she can’t kind of wait and see what happens. She can’t sit by and accept that something could happen to Isabelle. So that’s why at the end of the episode she kind of makes that decision to go off and warn her, even though she knows trying to make contact with someone from the CRM could result in her own death,” showrunner Chambliss explained, pointing on Al’s feelings for Isabelle after all this time.

Fear The Walking Dead – The Invitation

Alicia risked her life to let her friends escape from the embalming table and was seemingly destined for trouble until Teddy showed up. Her savior reached out his hand to her and said: “I’ve been looking for someone like you for a long, long time.”

Goldberg disclosed Ted has undisclosed plans for Alicia. “As The Holding looks to close its doors forever and continue civilization below ground, we have a concerning suspicion those chickens aren’t the only things he’ll be looking to breed.”

The newest villain and Al are opposite characters with different agendas. Goldberg teased Teddy’s twisted view: “He has a very specific role in mind for her… And the question is, is Alicia going to go along with that?”