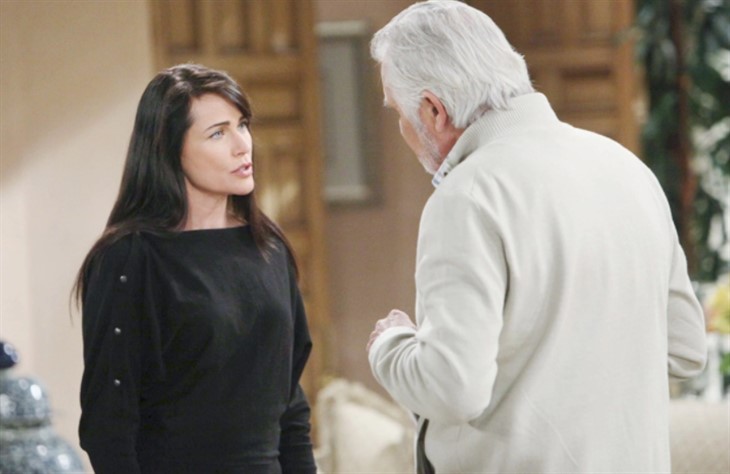 The Bold And The Beautiful Spoilers – Quinn Forrester Made Egregious Mistakes, And Eric Forrester Can’t Trust Her

The straw that seems to have broken the marriage camel’s back happened last year when Quinn was intent on breaking up Ridge and Brooke Forrester (Thorsten Kaye, Katherine Kelly Lang) and with the cooperation of her best friend Shauna Fulton (Denise Richards) arranged for a drunken Ridge to be married to Shauna in a Las Vegas wedding, and a text to be sent from Ridge’s phone to Carter Walton (Lawrence Saint-Victor) to put through the divorce papers finalizing Brooke and Ridge’s divorce!

Viewers will recall that Brooke figured things out and flew to Las Vegas to retrieve him and the whole sordid story came out later when Shauna’s conscience wouldn’t allow her to go through with a renewal of vows for their unconsummated marriage. Shauna confessed the whole thing to Ridge and to Eric since Eric had been kind enough to allow her to continue staying in the guesthouse on the Forrester mansion property. Eric appreciated Shauna’s honesty.

Viewers of The Bold and The Beautiful will likely agree that the relationship of Eric and Quinn may be broken beyond repair, and Eric indeed would be better off without his unfaithful, scheming wife! Eric had given Quinn more than enough chances to change herself and better herself into someone he could trust, but she has failed to do so. Most recently she lured Carter into a sexual relationship, although she cried to Shauna that it “just happened”.

The Bold And The Beautiful LEAK: Quinn And Carter Love Child The Result Of Steaming Up The Sheets?https://t.co/JY5HqYaqZk

Even Shauna couldn’t believe it when she told her! Carter is Ridge’s best friend and a trusted associate of Eric’s, and Carter could barely believe what he allowed himself to get into as well and he and Quinn swore to each other no one could or would ever know. And yet Quinn told Shauna, and was partly overheard by Eric, with Shauna having to lie to Eric and cover for Quinn, which is something she was not comfortable doing!

Viewers of The Bold and Beautiful know that manipulative, scheming Quinn will never change, and she has proven it in recent episodes! When Eric makes his final decision, it is more likely to be for divorce than for reconciliation, given he is not even attracted to her sexually anymore! Eric would be better off without her because she will not be faithful!