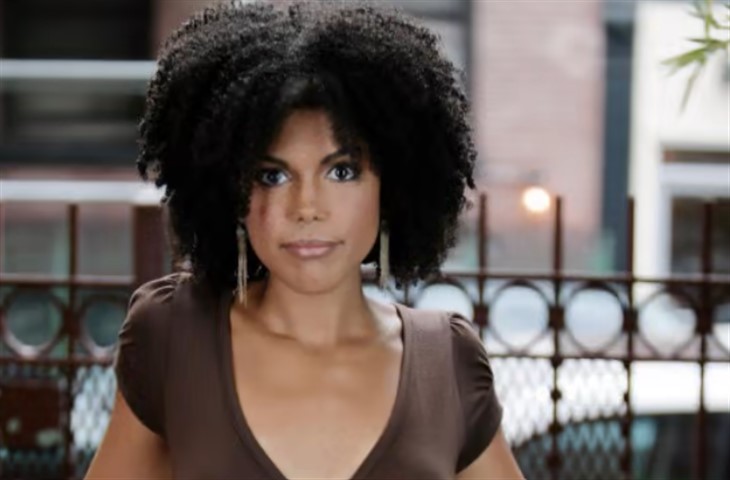 The Young and the Restless (Y&R) spoilers say that while B&B actress Karla Mosley knew that she was only stepping in to play Amanda Sinclair temporarily, she couldn’t help but feel an instant connection to the character. That’s because it turns out that the middle name of Karla’s daughter Aurora is Imani, which happens to be the name of Amanda’s on-screen sister, too. And for Karla, this was nothing short of kismet.

Karla says there’s another reason why Imani is such an important name for her and her family. Speaking to Soap Opera Digest in a new interview, Karla put it this way, “We also look at Imani as my daughter’s alter ego, so the fact that there is tension between Amanda and her sister is so great. I have a sister and we are very close and then Maya had sister drama on B&B, so that type of relationship has a special place in my heart. I can hook into that energy pretty easily.”

Karla went on to say that she certainly misses her own real-life sister who she hasn’t seen in the last year because of the fact that she lives in New York City while the actress and her family live in Los Angeles. The ongoing pandemic that has been the coronavirus has certainly made it tough for everyone to reconnect with their families. With that said though, Karla added that being a mom to a busy toddler has kept her on her feet! That’s because little Aurora is quite the firecracker.

The Young And The Restless: 5 Things You Need To Know About Chloe Mitchell’s Mental Health Issueshttps://t.co/yz1mbzHpOf

Y&R News – Karla Mosely Is Being Kept On Her Toes

She said, “Towards the end of B&B, Aurora was just a baby then and it was different. But I come home now from Y&R exhausted, and she’s like, ‘Hey come on, let’s play!’ so there’s no sitting on the couch and staring into space. While this job continues, I’m so grateful to be a mom who works.”