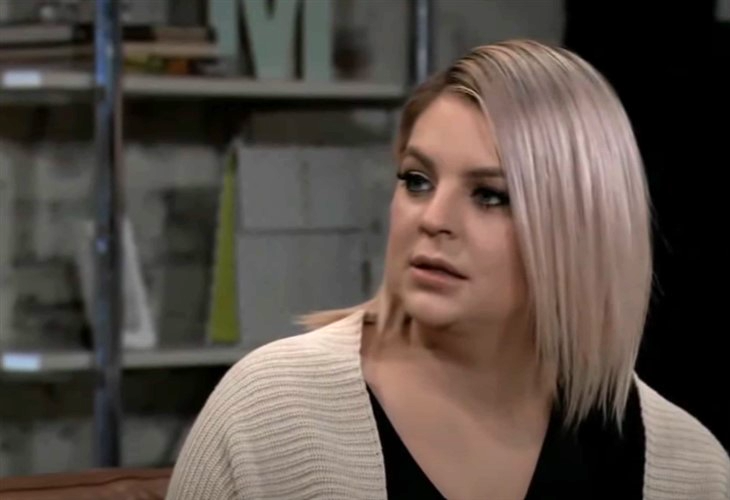 General Hospital (GH) spoilers tease that Maxie Jones’ (Kirsten Storms) new doctor will have surprising information about her baby in an upcoming episode of General Hospital!

It would have to be someone who is not under Renault’s thumb and who does not have allegiances with Peter August (Wes Ramsey)! Perhaps Dr. Portia Robinson (Brook Kerr) will step in to help – surely she will have been apprised of the very dangerous Peter by this time. After all, even though Valentin Cassadine (James Patrick Stuart) may not be aware that Brook Lynn is faking her pregnancy, he definitely knows that Peter would be a threat to Maxie and her baby, and he and Anna Devane (Finola Hughes) are working to take Peter down and know of the disappearance of Britt. Many are working behind the scenes to take down Renault as well, and Portia is one of them. She can be trusted in the Maxie/Brook Lynn baby situation.

General Hospital viewers will remember that Brook Lynn appears to be further along than Maxie, although both are in their third trimester – or appear to be, in Brook Lynn’s case! General Hospital viewers will wonder what kind of surprising information Maxie’s doctor could have about her baby – especially if it’s Portia and she’s “in on it”! If Portia is the new doctor, she will have some news that will be in line with Maxie and Brook Lynn’s plan. In that case, the news will not be so surprising to Maxie because it will be part of the plan!

There could be a chance that little Louise is becoming impatient, and her birth maybe sooner than was previously thought! Again, this could just all be a show for Peter August so that plans for Maxie’s and baby Louise’s safety can be carried out. Another option is that there may actually be some sort of problem – which would be bad news for Maxie but could work with her plan to tell Peter that the baby died. Shortly after this happens, Peter and Maxie will need to make a decision about the birth of their baby, so it sounds like there could be a reason for a caesarian section birth to be necessary.

General Hospital Comings and Goings: Kristina Wagner Is Back On GH @SoapOperaSpy https://t.co/NSSOANWMQl

The baby could be turned the wrong way inside Maxie’s womb, or ultrasound imaging may show that the umbilical cord is around her neck! If that is the case, there would likely need to be a caesarian section since the baby would strangle during a vaginal birth! Steps will have to be taken to ensure Peter is not in the delivery room and it may work to Brook Lynn’s advantage too – she doesn’t want Valentin Cassadine (James Patrick Stuart) anywhere near when she “gives birth” either, and perhaps the way to do it will be for it to “become necessary” for Valentin to keep Peter away from the hospital!