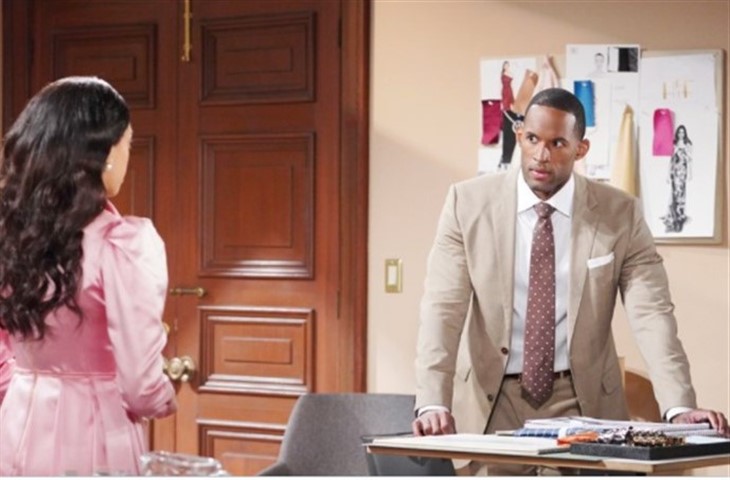 The Bold And The Beautiful (B&B) spoilers indicate that Zoe Buckingham (Kiara Barnes) will continue her quest to get Carter Walton (Lawrence Saint-Victor) back. Carter and Zoe were engaged until she chose to try to start a relationship with Zende Forrester (Delon De Metz). After getting caught up in her attraction to Zende, Zoe lost Carter. Can she get him back?

The Bold And The Beautiful’s Zoe has made yet another mistake. Zoe thought she had made a friend in Quinn Forrester (Rene Sofer). Unfortunately, Zoe put her trust in the wrong person and Quinn is now sleeping with Carter. Of course, Quinn’s husband has no idea what is going on either. However, both of them could soon be in for a huge shock. Zoe has no idea who is it but when she decides to surprise Carter, Zoe is in for a shock. Zoe is about to learn that Carter is seeing another woman and will demand answers.

The Bold and The Beautiful’s Carter is a free man. Carter broke up with Zoe because she cheated on him. Carter decided if he wasn’t enough man for Zoe then she didn’t need him. Carter has not even been dating until Quinn came along. Zoe had confided in Quinn who offered to talk to Carter for her. Unfortunately, Quinn ended up falling into bed with Carter as well. Carter and Quinn have sworn to stop seeing each other but continue to end up in bed together. Will the two lovers get caught by Zoe?

The Bold And The Beautiful Spoilers – Zoe Buckingham Demands Answers

The Bold and The Beautiful’s Zoe will demand to know who Carter is seeing so quickly after their breakup. Zoe is also likely to accuse Carter of not loving her at all. However, Carter cannot reveal the identity of his lover. If the truth about Quinn was to come out a lot of relationships could be in trouble. Quinn is a married woman. Quinn is also the stepmother to several opinionated grown children. Quinn has messed with the lives of some of those children as well. If Zoe uncovers Quinn’s identity, Carter could lose his job as well. How would Zoe take if she learns of her friend’s betrayal?

Zoe isn’t likely to stop until she gets the answers that she wants. However, Zoe isn’t about to be happy with what she discovers. Will Quinn and Carter’s relationship cause Zoe to leave town? Will Zoe make sure that the Forrester family knows the truth first?