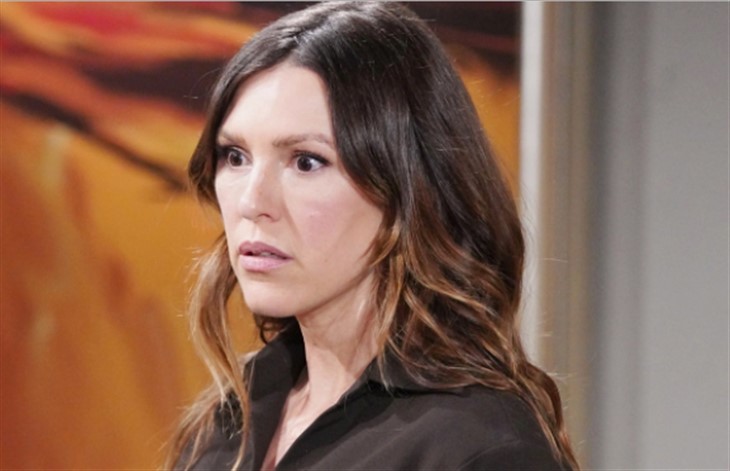 The Young and the Restless (Y&R) spoilers indicate that Chloe Mitchell (Elizabeth Hendrickson) and Chelsea Lawson’s (Melissa Claire Egan) friendship will come to an end.

Chloe and Chelsea’s friendship has been tested throughout the years. Although the two pals have had their share of arguments, they’ve always worked things out. But this time their bond may be broken for good.

Chelsea put Chloe in a tough predicament when she used her pal in her plot to frame Adam Newman (Mark Grossman) for Rey Rosales’ (Jordi Vilasuso) poisoning. Chloe was aghast when she learned that she was a pawn in Chelsea’s scheme. Although she struggled with her conscience, Chloe agreed with Chelsea’s request to keep quiet.

Now, it looks like Chloe will regret that decision.

The Young And The Restless Spoilers – Chelsea Newman Confesses

Chelsea is confident her plan is foolproof. With her “immobile” due to the stroke, no one would believe she poisoned Rey. While Chelsea has Rey convinced of her innocence, Victor Newman (Eric Braeden) is onto her con.

Victor is working on clearing Adam’s name and making Chelsea pay for her crimes. His past threats had no effect on Chelsea, but this time he plays hardball by bringing in Connor Newman (Judah Mackey). Victor promises Chelsea he won’t take Connor away if she confesses to poisoning Rey.

Now an unnerved Chelsea is backed into a corner. She doesn’t want to go to jail, and she also doesn’t want to lose her son. She’s in a no-win situation, and with the cards stacked against her, that leaves no other choice.

This week Chelsea decides to confess to Rey, which means she and Chloe will be arrested. This is Chloe’s worst nightmare, now she along with Chelsea will face the possibility of jail time.

The two women have found themselves in a tough situation, one that will test their friendship. Chelsea promised Chloe they wouldn’t be caught, but she went back on that vow. With Victor threatening her and Chloe, Chelsea thought she had no other choice.

Chloe is going to be upset when she learns that Chelsea confessed. They assumed they were in this together, but now it’s every woman for herself.

Chloe has found herself in plenty of legal trouble over the years. Luckily, she had the assistance of brother-in-law Michael Baldwin (Christian LeBlanc) to get her out a jam. Now, she may not be so lucky.

Michael warned her to be on her best behavior and stay out of trouble. But with Chloe being an accessory to a crime, things aren’t looking good for her. She’s facing the possibility of life behind bars away from Kevin Fisher (Greg Rikaart) and their kids.

Needing to protect herself and her kids, Chloe decides to make a bold move. Want that move is unknown, but odds are it will have to do with Chelsea. Since Chelsea broke her promise, Chloe will have no choice but to reveal everything she knows about Chelsea’s scheme. In exchange for what she knows, Chloe hopes for a lenient punishment.

Whether Chelsea or Chloe serve any jail time remains to be seen. But one thing’s for certain, their friendship may be broke as a result of Chelsea’s scheme.