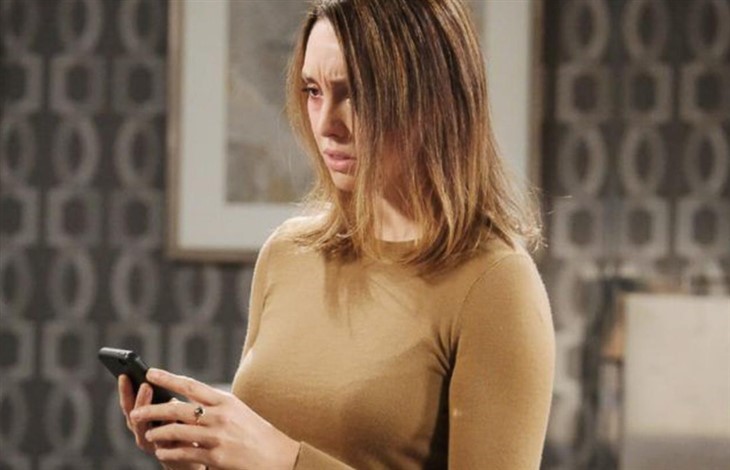 Days of Our Lives (DOOL) spoilers tease that an unexpected roadblock will present itself to Gwen Rizchech (Emily O’Brien) as she continues to blame Abigail DiMera (Marci Miller) for the miscarriage of her baby with Chad DiMera (Billy Flynn). Days of Our Lives viewers suspected that Dr. Clay Snyder (Michael Lowry) might not be on the up and up, but now he blackmails Gwen over her fake miscarriage story!

Days of Our Lives viewers will recall that Dr. Snyder is Tripp Johnson’s (Lucas Adams) supervisor at Salem University Hospital, but also the doctor that treated Gwen when she had strange pains, and he did some checking and saw that she had miscarried. Days of Our Lives viewers will recall that Gwen was disappointed and devastated, after Dr. Kayla Johnson (Mary Beth Evans) having checked her just the day before and informing her everything was fine. Gwen had been thinking about aborting, but then changed her mind when she heard her baby’s heartbeat during the ultrasound and then changed her mind about looking at the images – she was having a little girl.

Days Of Our Lives (DOOL) Spoilers: Sami And Lucas Desperately Look For A Way To Escape

Gwen’s whole attitude had changed at that point, and she determined to raise her little girl far differently than her own single mother had raised her. But it seemed that it was not meant to be, and she had gone to the DiMera mansion to notify Chad of the miscarriage and then her father Jack Deveraux (Matthew Ashford). But she ran into Abigail first, who chose to start an argument with her at the top of the staircase, and as she grabbed Gwen’s wrist, Gwen lost her balance and tumbled to the bottom of the stairs! Chad and Jack, who had been talking in another room, opened the door to the foyer just in time to see her take the fall, which from their perspective, had looked like Abigail pushed her down the stairs! Gwen, angry and hurt, took advantage to blame her and push down the stairs for her miscarriage!

Days of Our Lives viewers will recall that Jack immediately got Gwen to the hospital after her fall, with Chad and Abigail following. Dr. Snyder happened to be the doctor on call, and when he saw Gwen, he wanted to know why she was admitted. Jack interrupted, telling Snyder that his daughter fell down a flight of stairs and was pregnant – Snyder wanted to know why Gwen didn’t mention a fall. Jack said it just happened, and Snyder looked askance at Gwen before ordering Jack out of the examining room, finally leaving when Gwen said it was okay.

Gwen explained she hadn’t gotten a chance to tell her family that she had miscarried before the fall down the stairs – but didn’t want him to tell Jack or anyone else that she had miscarried before being brought back to the hospital. Snyder assured her that he actually couldn’t, due to patient-physician confidentiality laws, also known as HIPAA. Jack had told Abigail and Chad that Gwen was okay but didn’t know about the baby. Then Snyder joined them and directed them to ask Gwen any questions about the baby.

They thought that was strange but Snyder did tell them she would have a CT scan to rule out any head injury and that she will have some pain and stiffness and reiterated that otherwise, she seemed okay. Jack was suspicious – Snyder had seemed to know something was already wrong before he even examined her. Chad and Abigail went in to see her and that’s when Gwen told Chad that Abigail pushed her down the stairs and caused her to miscarry! Observant Days of Our Lives viewers may have caught Dr. Snyder in the background of the shot looking through the hospital room door and hearing this. Now, he is blackmailing Gwen with the truth that he knows, but whether it is for money, which she’d have to get from Jack or Chad, or for some other reason, remains to be seen!