The Bold And The Beautiful (B&B) Spoilers: Brooke Right To Suspect Quinn – Eric Is Too Generous 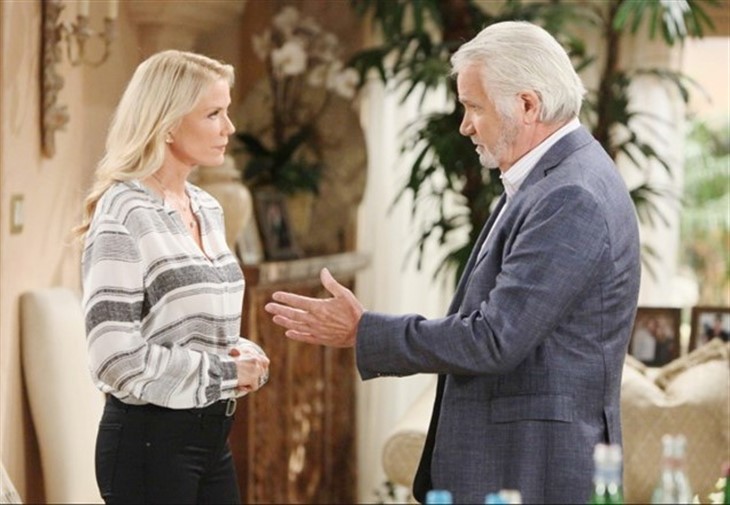 Eric has talked himself into believing that he owes more to Quinn Fuller Forrester (Rena Sofer). He also is certain that she’s always remained loyal to him. This poor soul doesn’t realize that she has broken their vows on two recent occasions.

The Bold And The Beautiful Spoilers – Bridge On Patriarch’s Side

Eric is the founder of Forrester Creations. More importantly, he’s the head of the Forrester family.

Ridge Forrester (Thorsten Kaye) and Brooke know that he’s going through another rough period in his marriage. Like Eric, Bridge doesn’t know that Queric is in the midst of a cloaked, slow-motion collapse.

However, the support of his son and daughter-in-law, who is also Eric’s staunchest supporter, ex-wife, and mother of two of his children, will prove vital.

Brooke never liked Quinn. She felt that Sofer’s character glommed onto Eric from the beginning. Quinn was seen as a taker, who would give Eric grief in return.

The point that Brooke continually stresses is that Quinn isn’t the right woman for Eric. It’s not that she wants to reunite with her former husband, but rather that she’s protective of him. Ridge feels that Brooke volunteers too many strong opinions. He’s off-base where Quinn is concerned and should know better, based on when they kissed a handful of years ago.

Eric will realize that Brooke’s senses were right when the Quarter reveal happens. That will be a devastating time, as Carter is someone who Eric treats like a son.

Bold And The Beautiful (B&B) Spoilers: Carter Ends Up With Quinn Or Zoe? https://t.co/cTzEkhT55I pic.twitter.com/nAJnUhbjD4

The Bold And The Beautiful Spoilers – Eric Forrester Heading Toward Heartbreak

What’s rather sad is that Quinn does love Eric. But she’s unbalanced, which generates repeated instances of erratic behavior.

Quinn actually needs mental health therapy and couple’s counseling. Instead of pursuing solutions, she’s chosen to betray her husband’s trust. She does feel terrible about what’s happened, which at least indicates that she has a partial conscience.

McCook’s alter ego has come to feel sorry for Quinn, believing that he’s been too harsh on her. All viewers know that he’s in for an eventual, epic B&B shocker.

Eric’s heart will be crushed, with his sense of reality being infinitely more damaged than when Quinn and Shauna Fulton (Denise Richards) conspired to break up Brooke and Ridge. That lead-in storyline will be seen, in retrospect, like the lesson Eric didn’t learn from.