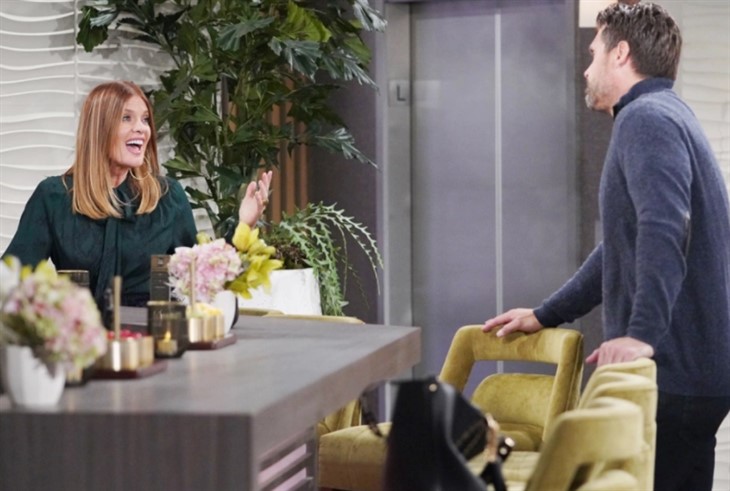 The Young and the Restless (Y&R) spoilers reveal that the Monday, May 17 episode brings shock and awe to Genoa City, Wisconsin when a loose cannon disrupts Kyle Abbott’s (Michael Mealor) joyful celebration.

Explosive show spoilers reveal that Ashland Locke (Richard Burgi) has kicked out his unfaithful wife Tara Locke (Elizabeth Leiner) and she demands that the real baby daddy step up. Right now only a handful of people know that Kyle is the bio dad of little Harrison so her appearance threatens to wipe out his happiness with Summer Newman (Hunter King).

The Young And The Restless Spoilers – Will Kyle Newman Step Up?

What will Kyle do when he discovers that Ashland wants to take custody of the tyke away from Tara?

On an amazing Friday Cliffhanger, Kyle’s jaw dropped to the floor when a very distraught Tara suddenly appeared with Harrison, who he has never met.

The timing is a train wreck as Tara and Harrison break up the engagement party. Why did Tara act so rashly?

That’s what Kyle will ask on the Monday, May 17 episode.

Kyle has been afraid of Ashland ever since he found out that Tara had his baby three years ago. Tara knows firsthand how ruthless he is and she begs Kyle to help her.

How can Kyle say no? He has felt guilty about his son ever since he found out that he is an MIA dad. Tara is a smart cookie and she will play Kyle like a violin, with Harrison accompanying on banjo.

When Kyle sees Harrison he melts into a puddle. But he’ll have to pull himself together in order to deal with Summer’s insecurities that Kyle will ditch her for a brand new family.

Kyle will be made to make a decision but he puts it off in the present moment and tells Tara he’ll get back to her later in the week. Can Kyle resist Tara’s pleas and Harrison’s doe eyes?

Elsewhere Phyllis Summers (Michelle Stafford) makes a major misstep by keeping a secret from Nick Newman (Joshua Morrow) and this will come back to bite her big time.

Meanwhile, Adam Newman (Mark Grossman) gets the surprise of his life. Could it have something to do with Chloe Mitchell (Elizabeth Hendrickson), his boo’s accomplice in a poisoning scheme?