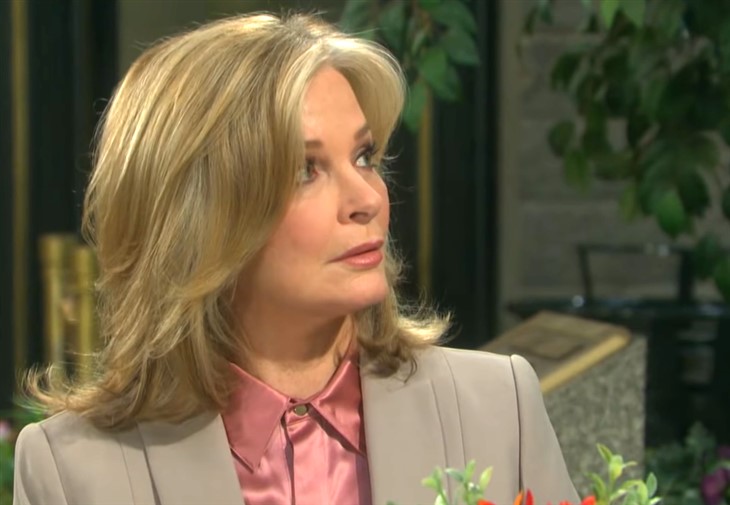 Days of Our Lives (DOOL) spoilers tease that Marlena Evans (Deidre Hall) and Brady Black (Eric Martsolf) will worry when Chloe Lane (Nadia Bjorlin) goes missing in an upcoming episode of Days of Our Lives!

Days of Our Lives viewers will recall that Lucas Horton (Bryan Datillo) and Sami DiMera’s (Alison Sweeney) plan to keep Chloe away from Brady backfired, and backfired royally! Instead of seducing Chloe, like Sami told Lucas to, he tried to gain her sympathy instead by telling her that he had a terminal brain tumor! Days of Our Lives viewers will recall also that Lucas didn’t count on Chloe’s taking over his “care” right up to getting him an appointment with a brain specialist, Dr. Michael Dunn (uncast).

Instead, Sami pulled Stan (Michael Lowry) out of her fifteen-year-old bag of tricks and impersonated Dr. Dunn who told Chloe that Lucas’s brain tumor had been a misdiagnosis. It backfired royally when Chloe remembered the last time that she had encountered “Stan” and remembered “he” was Sami, impersonating a man!

She was raking Lucas and Sami over the coals about Stan and had realized that Lucas faked his terminal brain tumor, and was going to interrogate him as to why when Dr. Kayla Johnson (Mary Beth Evans) came and told them that Brady had been brought in after a car accident.

DOOL Spoilers – Kristen DiMera, Disguised As Kate Roberts, Comes To The Hospital But Then Switches Disguises

Days of Our Lives viewers will also recall that Sami told Kristen DiMera (Stacy Haiduk) about Brady’s accident and him being brought to the hospital. Kristen, after looking for Kate Roberts, (Lauren Koslow) who had escaped from her car, realized it was Brady’s car that swerved to avoid them while she and Kate were struggling as Kristen was driving. She came immediately to the hospital, dressed as Kate, which mystified Sami and Lucas as to why she wasn’t worried about Lucas’ brain tumor, which they assumed Chloe had told her about.

Sami then called John Black (Drake Hogestyn) and her mother to tell them about Brady being brought in. John and Marlena will be at the hospital as Brady recovers enough to be out of the woods. Chloe will remain at his side, and Brady, when he is coherent enough to explain, will tell her about Kristen being out of jail and impersonating Susan!

Chloe, as Days of Our Lives fans will recall, had been a little suspicious about Susan all along! All it will take for Chloe to be in danger from Kristen is for Kristen to get one peek at her holding Brady’s hand in the hospital room, or worrying over him outside the intensive care unit.

Days Of Our Lives (DOOL) Spoilers Tuesday, May 11: Nicole Gets Devastating News, Sami Gets A Cluehttps://t.co/KGHqZxORsa

DOOL spoilers show Kristen switches gears and disguises as she changes out of her Kate Roberts disguise into that of a surgeon, so as to be able to move about Salem University Hospital freely. It is likely that it will be the hospital where Kristen kidnaps Chloe, and when Brady realizes she too is missing, along with Sami and Lucas, who Kristen kidnaps and traps in the DiMera wine cellar, he will tell Marlena the truth about Kristen and that she likely took Chloe!