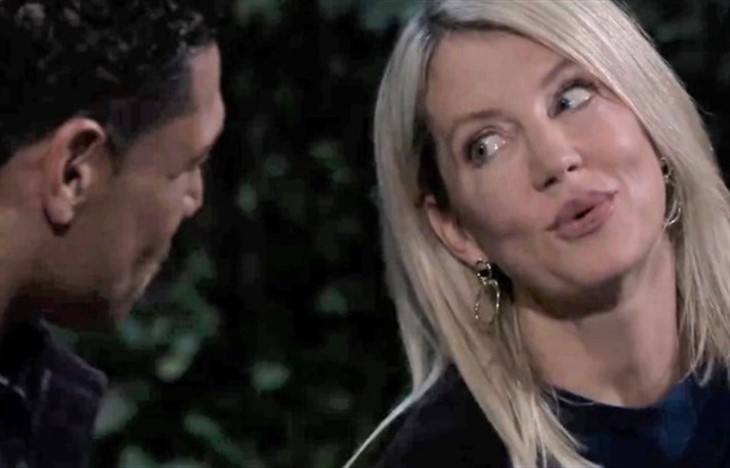 General Hospital (GH) spoilers tease that Nina Reeves (Cynthia Watros) “has some ‘splainin’ to do after sneaking back into Elijah Crowe’s (Dan White) business office in an upcoming episode of General Hospital! She feels trapped!

General Hospital Spoilers – Nina Reeves Thought She Had A Plan

General Hospital viewers will recall from a recent General Hospital episode that Nina had gone with Elijah to his business office after he was interrupted during their first “date”, a picnic. There they found that the office had been trashed and petty cash missing, but nothing else appeared to be missing. General Hospital viewers will recall that “Mike” aka Sonny Corinthos (Maurice Benard) had made an amateur mistake and didn’t think to check for security alarms and disarm them – or maybe he just didn’t know how to begin with, let alone remember how.

Back in Port Charles, he always had Brick, (Stephen A. Smith) Damian Spinelli (Bradford Anderson) or Jason Morgan (Steve Burton) to do things like that. General Hospital viewers were surprised to see Sonny installing a flash drive on Elijah’s laptop! But he was interrupted in the process when the security alarms went off, and barely escaped the office when Elijah, Nina, and the sheriff arrived! After the crime scene tape was put up and Elijah, the sheriff and Nina left, Nina came back through the back door, which Sonny had left open.

But first, before she left, she detached one of her earrings in the back part of the office near Elijah’s desk when Elijah and the police weren’t looking. She obviously figured looking for her earring would be her excuse should Elijah come back while she was still there. But when he came back, apparently he wanted to avoid the crime scene tape and came through the back door, which was not supposed to be unlocked, and caught her at his desk where his laptop is!

GH Spoilers – Nina Reeves Had Some Explaining To Do!

General Hospital viewers will recall that right after Nina completed getting the telling information loaded off of Elijah’s laptop, he sneaked up behind her! Of course, Elijah wanted to know what she was doing there and she of course used the earring as an excuse. But Elijah will have more questions for her later – one will be about why the back door was unlocked, to be sure. Nina will have to think quickly or do a very convincing acting job to explain that. She may simply she doesn’t know.

But Nina was in a hurry when she completed the downloads, and Elijah may discover some files missing afterward! Nina should know better – but then Sonny had started the process, and perhaps when he uploaded he didn’t copy the files – he may have started the process to extract the files, and Nina failed to notice when she came back to finish the job! General Hospital viewers would think that Nina would have double-checked, but again, she was in a hurry!

She didn’t know when or if either Elijah or the police would return to the scene of the crime! Now, Elijah has cornered her with accusations of being in on the break-in and downloading files off of his computer! Nina feels trapped – she isn’t sure what to do or say! She may come up with an easy excuse like the power blinking when she was in there looking for her earring but Elijah may have already been in another part of the building and would know that wasn’t the truth! Nina will be in some big trouble if she cannot convince Elijah she had nothing to do with any loss of data or the break-in itself!