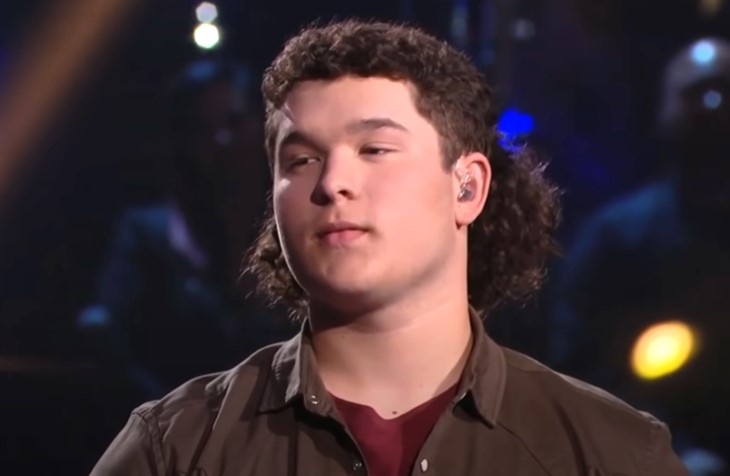 American Idol fans seemed very shocked when a video emerged that revealed the Top 5 finalist once wore a hat depicting the KKK. Actually, he did extremely well and even the judges seem sad that it all put an end to his run in the show. Meanwhile, loyal fans think that it was all some sort of conspiracy by fans who felt jealous because he knocked out their favorite performers.

About five days ago, Caleb took to his Instagram and apologized for the video that saw his race for the crown end. Although it happened years ago, someone found the old video on his social media, and it soon made the rounds. Naturally, it was always considered unlikely that he’d survive it. After all, even established entertainers fell out of favor with this sort of thing. The predictions that his days of glory were over, came true.

The American Idol judges, Lionel Richie and Luke Bryan took a long time coming up with reactions. People Magazine revealed that Luke wished Caleb well in the future. Meanwhile, Lionel felt sad because some silly thing done by a younger person came back to haunt the talented singer. Richie said that some hard decisions have to be made sometimes. In the meantime, Caleb apologized saying, “I’m so sorry!” Kennedy added. “I pray that I can one day regain your trust in who I am and have your respect! Thank you for supporting me.”

Are American Idol fans buying into some sort of conspiracy theory? On Caleb’s Instagram, some of them claimed that other fans who were disappointed that he knocked out their own faves, leaked it. Otherwise, they argue, why didn’t the racist-related video emerged long ago? One fan wrote, “The timing of the video seems suspicious to me. This video could have arisen immediately after Caleb’s first audition but it didn’t.” 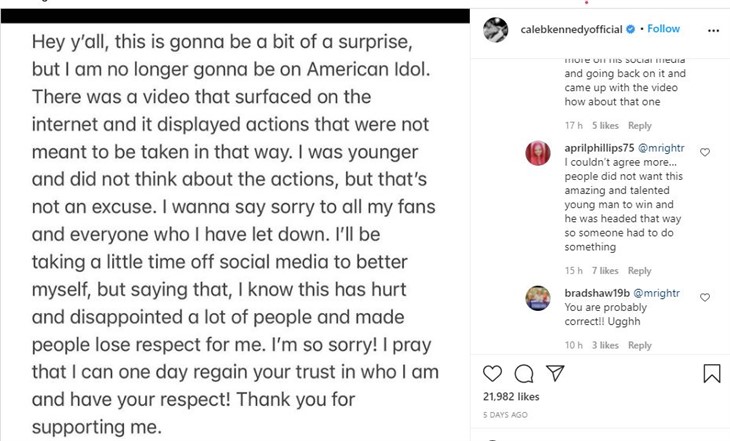 The American Idol fan continued by saying, “My theory is that people got mad that Caleb advanced to the final 5 over Hunter and Arthur.” He then alleged that possibly that made them dig around for some dirt so Caleb “would be asked to leave the completion.” Not alone, others agreed that was a possibility. One of them replied, saying, “I was thinking the same. Why wait until the top five finalists to bring this to the attention of social media?”

Actually, more American Idol fans felt inclined to think the same thing. This comment also arrived: “I couldn’t agree more…people did not want this amazing and talented young man to win and he was headed that way so someone had to do something.”

In response, some critics felt that it’s all just a stupid “conspiracy theory.” One of them argued that maybe because of his growing popularity, more people went back through Caleb’s older social media posts. Meanwhile, others slammed those who defended the kid who was 11 or 12 when the video happened.

Remember to check back with us often for more news about Caleb Kennedy and the popular talent show, American Idol.