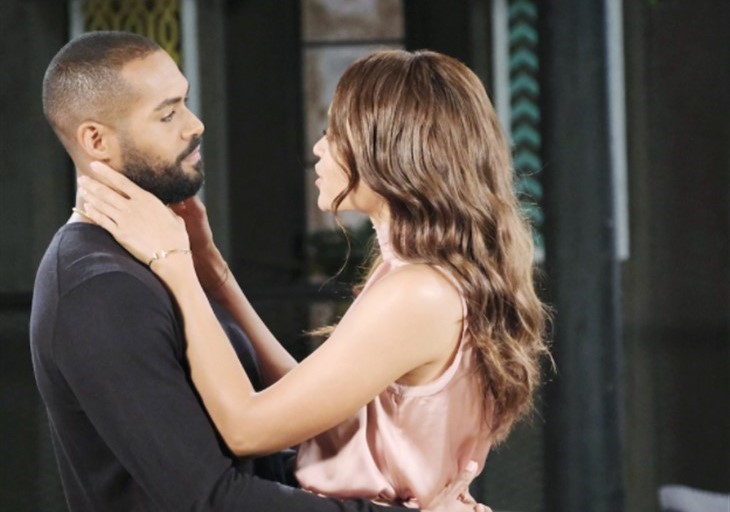 Days of Our Lives (DOOL) spoilers tease that Eli Grant (Lamon Archey) will warn Lani Grant (Sal Stowers) that Kristen DiMera (Stacy Haiduk) is on the loose in an upcoming episode of Days of Our Lives!

Days of Our Lives viewers will recall a few years ago that after Lani left Salem after Gabi Hernandez (Camila Banus) blackmailed her into leaving Eli at the wedding altar, Kristen was on the run at the same time after being falsely under the impression that her baby died.

Days of Our Lives spoilers show that was after Victor Kiriakis (John Aniston) and Xander Kiriakis (Paul Telfer) came up with the bright idea of swapping Sarah Horton’s (Linsey Godfrey) dead baby for Kristen’s live one.

Kristen, out of her mind with grief, had run blindly out of Salem University Hospital, pushing Haley Chen (Thia Megia) out of her way on a flight of stairs, causing Haley’s death. Lani and Kristen became unlikely novice nuns at a convent in Italy where Kristen had once stayed before, after a severe accident that nearly ended her life.

They also became best friends and when they returned to Salem, they returned together. Lani had since helped Kristen escape jail which put Eli in a very awkward position, and he cannot let Lani and Kristen’s bond with each other interfere with justice again!

Since Kristen has been out of Statesville after convincing Susan Banks (Stacy Haiduk) to swap with her for what started as weeks and turned into months, she has not tried to contact Lani. But now Kristen’s cover has been blown, and so many people know that it is impossible for her not to return to prison with even more charges and even more prison time, so Eli expects her to look to Lani for help!

Days of Our Lives viewers know that Kristen is bound to contact Lani and ask her for help and so does Eli! He warns Lani that Kristen is on the loose and has been using at least two disguises that law enforcement is aware of – as Susan Banks and as Kate Roberts (Lauren Koslow).

They still haven’t figured out that Sarah Horton (Linsey Godfrey) is missing, not moved because Rex Brady (Kyle Lowder) hasn’t been back to Salem or told anyone Sarah broke up with him again since he went back to Chicago. However, since Rex is also Kate’s son along with Philip Kiriakis (Jay Kenneth Johnson) and Lucas Horton (Bryan Datillo) that could be revealed as well!

Kate will undoubtedly call Rex and tell him about what Kristen had planned for her! Days of Our Lives spoilers reveal that Chanel Dupree (Precious Way) is staying at their apartment and taking care of their babies, twins Jules and Carver (uncast infant actors) while Lani is at work. Chanel will also need to be advised about Kristen and that she might show up!

Lani may have a difficult time believing that Kristen has been out in Salem all this time without contacting her at least in the guise of Susan! She has known Susan has been in town because when the real Susan first came she had psychic visions that contributed to Ciara Weston’s (Victoria Konefal) rescue!

Days of Our Lives spoilers and rumors hint Lani will be contacted by Kristen in upcoming episodes – the question is, will she help her go on the run, or will she encourage her to turn herself in?