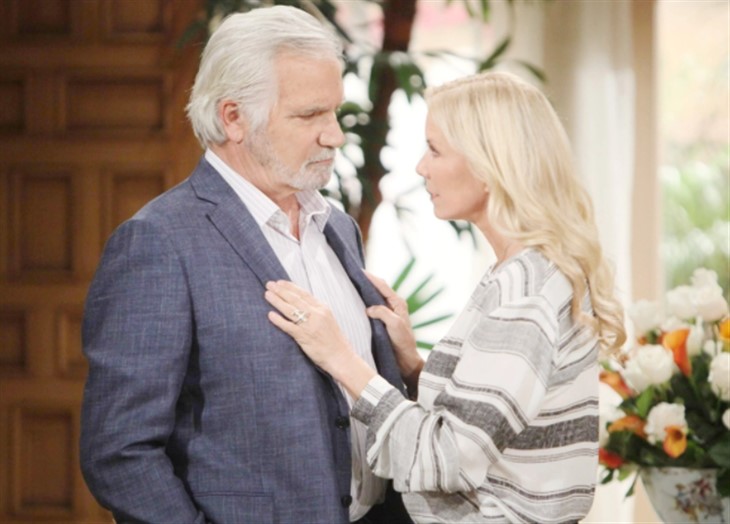 The Bold and the Beautiful (B&B) spoilers reveal that “Quarter” will be exposed at some point in the near future. Brooke Logan Forrester (Katherine Kelly Lang) will somehow find out. If she doesn’t discover it, then someone will tell her. She will want Quinn Forrester (Rena Sofer) to hurt as much as possible. But could the way Brooke exposes Quinn lead to another “Bridge” breakup?

The Bold And The Beautiful Spoilers -All Secrets Get Exposed Eventually

B&B spoilers reveal that Quinn and Carter Walton (Lawrence Saint-Victor) are keeping a huge secret. They swear that it will go to their graves but we know they will end up in bed at least one more time. In soaps, all secrets eventually come out and “Quarter” is no exception. Plus, Kiara Barnes will last appear in early July but there is no news of Saint-Victor going. So, that means Zoe Buckingham will likely be written out but Saint-Victor is staying, so something will break them up once again.

Denise Richards, who plays Shauna Fulton spoke with TV Insider. She said that Flo Fulton (Katrina Bowden) is “very difficult” and Shauna struggles to keep the truth from her. Now, Flo might be curious, but the only reason she would interrogate her own mother relentlessly is if Brooke put her up to it.

The Bold and the Beautiful spoilers reveal that Richards also teased that she doesn’t think that Shauna and Ridge Forrester (Thorsten Kaye) are completely done. In order for them to reunite, then something must happen to Ridge and Brooke’s marriage. We have seen Brooke push Eric Forrester’s (John McCook) divorce, Quinn. Meanwhile, Ridge thinks that Eric should be with who makes him happy… even if it is Quinn. Perhaps “Bridge” breaking up is tied to Zoe leaving town, Eric learning the truth, Flo’s interrogation, and Quinn being exposed.

The Bold And The Beautiful (B&B) Spoilers: Lawrence Saint-Victor Hints A New Side Of Carter https://t.co/0wiRsu2yfW pic.twitter.com/vGaAsmCL0S

Brooke is hungry for revenge as Quinn broke up “Bridge” in a very public way. She exposed Brooke and Bill Spencer’s (Don Diamont) kiss at the reunion party in front of their family and friends. It was humiliating and it is likely that Brooke will want Quinn to know what that felt like. Sometimes Brooke doesn’t think things through and this could be one of them.

In her quest to shame Quinn, Eric might end up being publicly humiliated. When Ridge finds out how far Brooke went and how much Eric is hurting, could that mean the end of “Bridge” yet again? It would explain all of the other spoilers, as well as Richards’ tease that Ridge and Shauna might not be over yet.