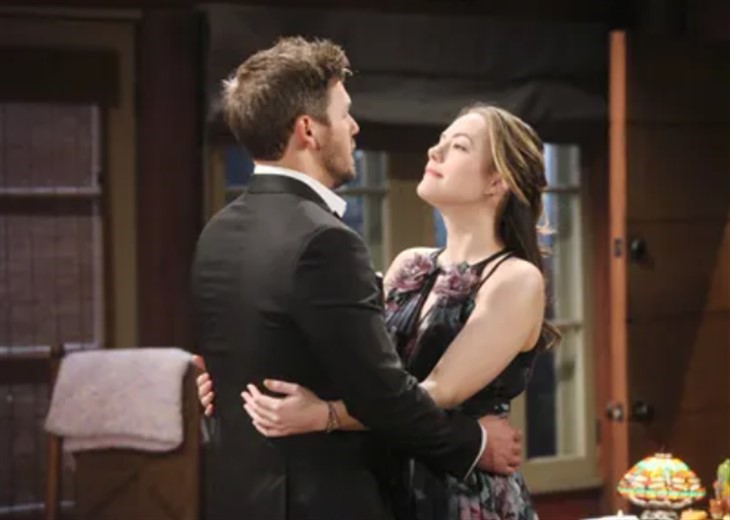 The Bold and the Beautiful (B&B) spoilers reveal that “Lope” makes love this week. However, the problem isn’t their romantic night but what happens the next morning. It seems to trigger Liam Spencer (Scott Clifton). Hope Logan Spencer (Annika Noelle) is alarmed when Liam’s erratic behavior dramatically increases, but she still has no idea what’s wrong with her husband.

The Bold And The Beautiful Spoilers – ‘Lope’ Make Love

B&B spoilers reveal that this week, Liam takes another step to try and prove his love and commitment to Hope. He arranges a romantic evening just for the two of them. Hope is deeply affected by it and finds herself falling in love with Liam all over again. She has been struggling to forget his betrayal and get their old lives back. So, this is a huge step for them and it leads to them making love. Noelle told Soap Opera Digest that it is the first time they have been intimate since they separated.

Although Liam and Hope have a wonderful night, the next morning is completely different. Liam has been acting strange ever since Vinny Walker’s (Joe LoCicero) death. However, Hope hasn’t connected the dots that Liam’s behavior is directly related to Vinny’s murder. What she sees the morning after will be far worse than before. Noelle told SOD, “… Liam is again acting aloof and strange. As things progress throughout the next day, Liam isn’t where Hope would think he’d be after a night like that. For him to be anything less than ecstatic the next day is worrisome, and that sounds the alarm that there is something more going on.”

The Bold And The Beautiful Spoilers – Liam Spencer’s Erratic Behavior

The Bold and the Beautiful spoilers reveal that Liam will continue to spiral downward. In fact, it is specifically stated that Liam “loses his grip on reality.” Then, Liam makes a very weird apology to Thomas Forrester (Matthew Atkinson). It will lead Thomas to have a raging confrontation with Bill Spencer (Don Diamont). Meanwhile, Hope begs Liam to open up to her. She basically tells Liam that their relationship won’t survive if he is once again keeping something from her. This sends Liam spiraling and he has an emotional meltdown over “losing everything.”

Hope is starting to become frantic and fears that there is something seriously wrong with Liam. She might even wonder if he is struggling with a mental illness. However, she can’t help him or be reassured if Liam won’t talk. Whether Liam confesses to Hope or not remains a mystery. We will have to keep watching the CBS soap to find out what happens next.