The Bold And The Beautiful (B&B) Spoilers: Will Zoe Try To Get Revenge On Shauna? 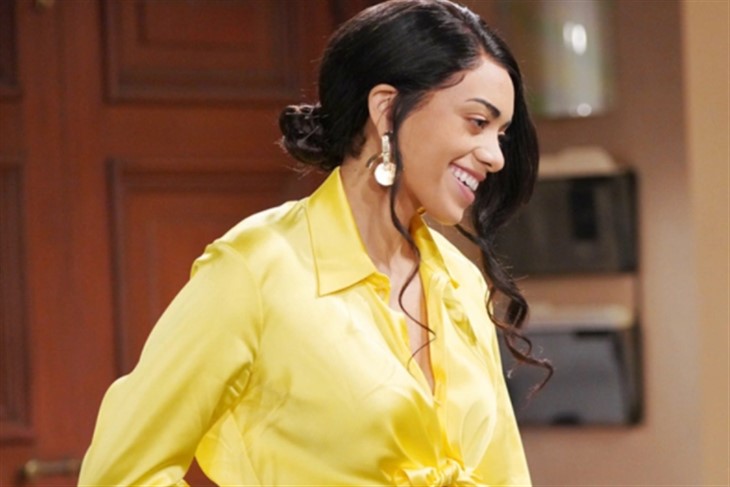 The Bold and Beautiful (B&B) spoilers and update reveal Zoe Buckingham (Kiara Barnes) wanted to find a way to win the man she loved back. Zoe had been in a relationship with Carter Walton (Lawrence Saint-Victor). Zoe sabotaged her relationship when she flirted with Zende Forrester Dominguez (Delon de Metz). Carter was upset that Zoe had tried to have a relationship with another man. Zoe and Carter had been engaged to get married. Carter decided to break off their engagement. Zoe turned to Quinn Forrester (Rena Sofer) to help her win Carter back.

Zoe was about to discover the truth when she went to see Carter. Quinn and Carter were going to be together again. She found some of Quinn’s clothes which included a red jacket on the floor while Quinn hid under Carter’s bed. Zoe was upset by what she saw and left. Later Zoe went to confront Carter and saw the jacket. Quinn and her friend Shauna Fulton (Denise Richards) were talking to Carter. Zoe remembered the red jacket. Shauna took the jacket and claimed to be the woman that Carter had been with. Zoe was upset to find out that Carter had been with Shauna. Later Carter decided to give Zoe another chance.

Zoe could believe that Shauna took advantage of Carter when he was in a bad place. Zoe may believe that Shauna should be held accountable in some way for taking advantage of Carter. Zoe knows that Carter is well respected by Eric and his son Ridge Forrester (Thorsten Kaye). Zoe could turn to Brooke Logan Forrester (Katherine Kelly Lang) to go after Shauna. Brooke does not like Shauna because she tried to take her husband Ridge away from her. Zoe could convince Brooke to help her get back at Shauna.

Zoe could think that Shauna has betrayed her friendship with Quinn. Quinn told Zoe that she did not know that Shauna was with Carter during the time that she was trying to help Zoe get Carter back. Zoe believes that Quinn was being a true friend to her. Zoe may get Eric to help her to go after Shauna because she betrayed Quinn’s trust. Eric expressed his concern for Zoe. Zoe knows that has been upset that Shauna almost came between Ridge and Brooke.

The Bold And The Beautiful (B&B) Spoilers: Brooke Right To Suspect Quinn – Eric Is Too Generous https://t.co/6xHJHn1RSB

Bold and the Beautiful Zoe could cause Shauna to have many different problems. Shauna, Quinn, and Carter know the truth about the one-night stand. They have decided to keep the one-night stand secret. Carter wants to try to make his relationship with Zoe work again. He does not want to lose the respect that he has from Eric and Ridge. Will Zoe want Carter to turn his back on Shauna? Will Carter want to defend Shauna for helping him and Quinn? Zoe may try to get Quinn to turn her back on Shauna. Will Quinn be able to defend Shauna without anyone finding out about the one nightstand? Tune in to Bold and the Beautiful to find out if Zoe decided to go after Shauna.