Bold And The Beautiful Spoilers: Can Hope And Flo Help Each Other? 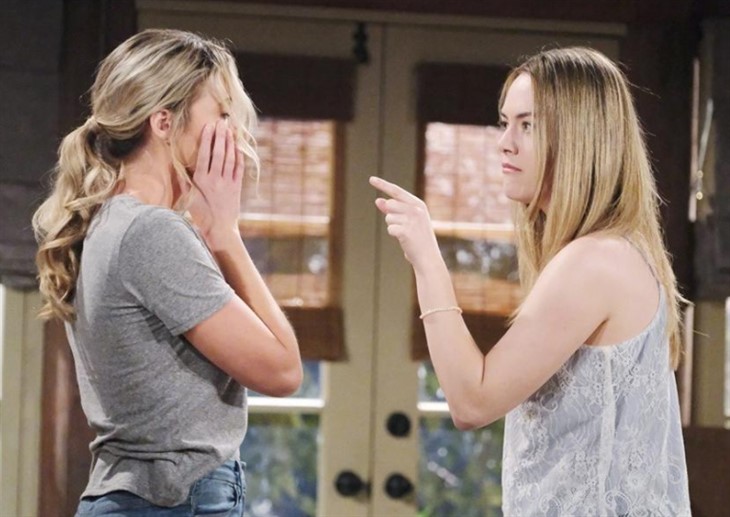 Bold and the Beautiful (B&B) spoilers show Hope Spencer (Annika Noelle) and Flo Logan (Katrina Bowden) have had a complicated past. Flo was involved in a scheme that Dr. Reese Buckingham (Wayne Brady) had put into motion.

He had arranged for Steffy Forrester (Jacqueline MacInnes Wood) to illegally adopt Hope’s daughter Beth Spencer (River Davison). Steffy and her mother Taylor Hayes (Hunter Tylo) did not know that the adoption was illegal.

Reese had Flo pose as the birth mother to Beth on The Bold and the Beautiful. Hope was devastated to find out that her daughter died. She thought that she would never be able to be a mother again.

Hope started to bond with Flo because she thought that Flo was like her a mother without a child. However, Hope and everyone else found out that her daughter Beth was still alive. Flo has felt great regret over the part that she played in the scheme because she lost her friendship with Hope. It nearly cost Flo everything else that she cared about as well.

The Bold And the Beautiful (B&B) Spoilers: Zoe Feels The Pain She Inflicted on Carter – Quinn Betrayal Strikes

The Bold And The Beautiful Spoilers – Flo Fulton Has Potential Problems

Flo believes that she is in a good place. She has gotten engaged to her childhood sweetheart Wyatt Spencer (Darin Brooks). Flo found out that she was the daughter of Storm Logan (William deVry). It has taken a while for Flo to get accepted by the Logan family because of her part in Reese’s scheme. She has found her place in her new family.

However, Flo does not know that Wyatt’s mother Quinn Forrester (Rena Sofer) has had an affair with Carter Walton (Lawrence Saint-Victor). Quinn was having trouble with her marriage to Eric Forrester (John McCook) because she tried to sabotage his son Ridge Forrester’s (Thorsten Kaye) marriage to Brooke Logan Forrester (Katherine Kelly Lang).

Quinn thought that Flo’s mother Shauna Fulton (Denise Richards) would be a better match for Ridge on The Bold and the Beautiful.  Flo will be torn between her loyalty to Wyatt, Quinn, and Shauna, and the Logan family when the truth about the affair comes out.

According to B&B recaps and spoilers, Hope was having trouble with her marriage to Liam Spencer (Scott Clifton). Liam had a one-night stand with Steffy who found out that she was pregnant. Steffy had a paternity test which showed that Liam was the father of her baby.

Steffy wanted the father of her child to be her boyfriend Dr. John Finnegan (Tanner Novlan). Liam and Hope had problems staying together because of the one-night stand.

However, Thomas Forrester (Matthew Atkinson) found out that Liam was not the father of Steffy’s baby. His friend Vincent Walker (Joe LoCicero) altered the test results. Hope and Liam have been able to get back together but Liam is keeping a secret from Hope.

The Bold and the Beautiful recaps reveal Liam and his father Bill Spencer (Don Diamont) were out for a drive when Liam accidentally hit Vinny. Bill helped Liam to cover up his involvement in Vinny’s death. Hope does not know that Liam accidentally killed Vinny.

The Bold And The Beautiful (B&B) Spoilers Monday, May 10: Are Quinn And Carter Inevitable? https://t.co/VzEF7RGKgb pic.twitter.com/GQ3dYp2x5Q

Bold and the Beautiful spoilers hint Hope and Flo may find that they have much in common. They are both going to be dealing with complex issues surrounding the ones that they love. Hope and Flo started to become friends before the truth about Beth came out. Flo and Hope are cousins because Hope is Brooke’s daughter. Brooke and Storm were siblings.

They may need to come together to face their problems. Can Hope put her troubled past with Flo behind her? Will Hope turn to Flo for help when she finds out about Liam’s involvement in Vinny’s death? Will Flo turn to Hope when she finds out that Quinn and Carter are having an affair?

Will Hope be able to help Flo with the complicated situation that she will have to deal with in regards to Quinn, Wyatt, and Shauna?