Days Of Our Lives (DOOL) Spoilers: Belle’s Sacrifice To Save Claire, Pleads Guilty To Murder 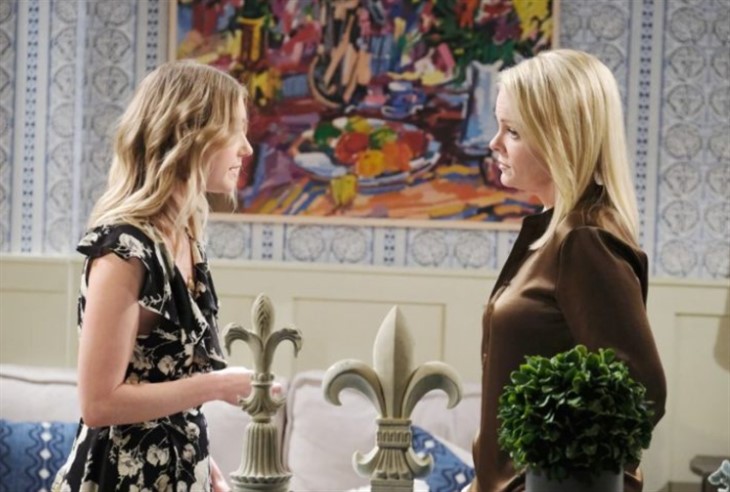 Days of Our Lives (DOOL) spoilers reveal that Belle Brady (Martha Madison) tries making a deal with the devil. To prevent Jan Spears (Heather Lindell) from killing Claire Brady (Isabel Durant), Belle offers to plead guilty to murdering Charlie Dale (Mike Manning). Will Jan accept the deal or will Claire have to be saved another way?

DOOL spoilers reveal that “Shelle” was able to confirm that Belle’s suspicion was right. She wondered if Jan woke up from her coma earlier than Dr. Snyder (Michael Lowry) claimed. Eventually, Belle and Shawn Brady (Brandon Beemer) were able to view the hospital security footage. They found proof that Jan was not only not comatose but walked out of her hospital room and nobody noticed.

Belle wanted to go straight to the police but Shawn stopped her. He has come up with a plan, but John Black’s (Drake Hogestyn) instincts were right. It’s a bad idea and it will backfire. As fans saw on Friday’s episode, Jan realized she was being tricked by Shawn.

Jan kidnaps Claire and they end up hotwiring the same car that Chloe Lane (Nadia Bjorlin) is trapped in. As fans recall, Kristen DiMera (Stacy Haiduk) threw Chloe in the trunk and is now using it to get herself out of going back to prison. Meanwhile, it is confirmed in the new issue of Soap Opera Digest that Claire tried secretly dialing Ben Weston (Robert Scott Wilson). Her call went to voicemail. However, when Ben plays the message, he can tell that Claire is in danger.

Meanwhile, Shawn and Belle are worrying about Claire. She hasn’t returned home and isn’t answering their calls. That is when Ben reaches out to tell them about Claire’s voicemail. He plays it for the Brady family and then goes on a desperate search to find Claire before it’s too late.

Days of Our Lives spoilers reveal that Shawn calls Jan, who confirms that she has Claire. Belle gets on the phone and tries making a deal with the devil. She offers to change her plea to guilty and go to prison for the murder of Charlie. However, will Jan take the deal and release Claire unharmed? Lindell explained to the magazine that Jan doesn’t trust them and fears it’s another trick. She ends up saying that she will think about Belle’s deal and hangs up.

When Jan kidnaps Claire, she confesses to killing Charlie and framing Belle for the crime. It is something she has planned for a long time. We don’t know if Jan’s confession happens before or after Chloe is found in the trunk. If it’s before, then Chloe could be the key to saving herself, Claire, and Belle.

Eventually, Claire will either be saved or escape. She will tell DA Melinda Trask (Tina Huang) about Jan’s confession. However, Trask will likely think Claire is just trying to save her mother. After all, Belle’s trial starts next week and a judge refused to throw out the hypnotism recording. This is where Chloe could step in and tell Trask that she heard everything while trapped in the trunk. To find out how this story ends, we will have to keep watching the NBC soap.