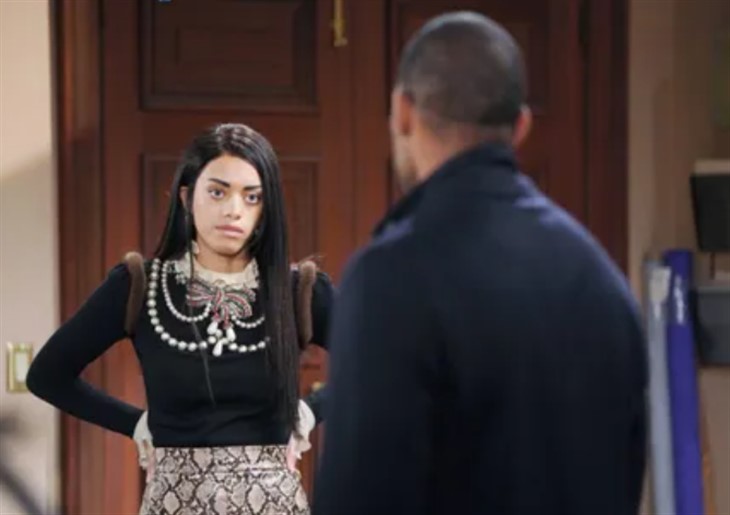 The Bold and the Beautiful (B&B) spoilers document that Zoe Buckingham’s (Kiara Barnes) unexpected reconciliation with Carter Walton (Lawrence Saint-Victor) thrilled her. But this desired reunion also came with a time limit.

Fans know that Barnes’ announcement about leaving the cast happened a number of weeks ago. Advanced recording schedules mean that B&B’s fans will soon be seeing the actor as Zoe for the last time.

Barnes’ departure from the cast is coupled with her becoming a regular member of the nighttime, broadcast network Fantasy Island reboot. This implies that Zoe is about to be shocked by the reality that Carter and Quinn Fuller Forrester (Rena Sofer) were involved.

Zoe is either leaving indefinitely or B&B will be recasting this character. There is no available news regarding another actor being hired to replace Barnes.

Assuming that Zoe learns what really happened in Carter’s life also means that she will be instantly devastated. The Zarter reboot will be short-lived with other drama also likely playing out in Quinn’s marriage.

It’s a shame that Barnes is leaving, as she embodied a compelling character who was involved in a number of engaging storylines. Her 2018 debut was strong and included Zoe’s obsessed pursuit of Xander Avant (Adain Bradley).

Barnes’s work in the Beth Spencer (Madeline Valdez and River Davidson) steal and conceal arc and later one-on-one interplay with Matthew Atkinson (Thomas Forrester) during the failed Thoe engagement was solid. Zoe became a vulnerable character, with a backstory that explained her erratic and interesting nature.

Carter informed Zoe that he wanted to break from negativity. She understood that to mean he was sorry that he’d broken off their engagement and had forgiven her.

Little did Zoe know that Carter became involved with Quinn this spring. That connection is extremely explosive, as it projects to breaking a marriage and ending Zoe’s second chance at being with Carter.

Saint-Victor’s alter ego was convinced that he and Quinn would keep what happened between them and that their lives could return to normal. Then, Shauna Fulton (Denise Richards) came to know the truth and inserted herself into the situation.

The Bold And The Beautiful Spoilers: Brooke Appalled by Liam & Bill's Crimes – Ridge Gets a Win #BB #boldandBeautifulhttps://t.co/mgy03ziuNF

Quinn was, is, and will likely always be trouble. She can’t help herself from becoming involved in other people’s problems, fanning the flames of conflict, or in sabotaging herself.

Carter wishes he hadn’t done what he did. But now that he has, twice, he’s stuck with having Quinn as his accomplice.

B&B fans know that multiple options exist to create the reveal in any coming episode. Barnes doesn’t have many shows left to appear in. So, the truth is about to be exposed in classic daytime fashion.