Days Of Our Lives (DOOL) Spoilers: Will Kristen Try To Kidnap Rachel And Go On The Run? 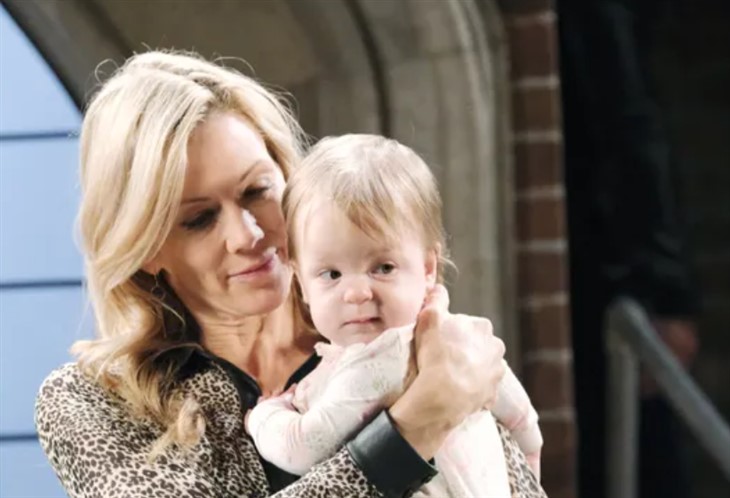 Days of Our Lives (DOOL) spoilers and rumors tease that Kristen DiMera (Stacy Haiduk) might try to kidnap her daughter with Brady Black, (Eric Martsolf) Rachel Black (Emma, Kate, and Miller Kamienski) when she goes on the run in a future episode of Days of Our Lives!

Days of Our Lives viewers will recall that Brady finally reached his breaking point with all of Kristen’s schemes and manipulations. Brady especially was upset about the people that Kristen injured in trying to keep her identity a secret-Days of Our Lives viewers will recall she’s been masquerading as Susan Banks (Stacy Haiduk) for about two to three months! Brady doesn’t even know what Kristen did to Sarah Horton (Linsey Godfrey) but he does know about what she did to Kate Roberts (Lauren Koslow) and Chloe Lane (Nadia Bjorlin), all out of jealousy over him!

Days Of Our Lives (DOOL) Spoilers: Brady Dumps Kristen – But Is It For Good This Time?

Kristen was not only devastated when Brady dumped her, it is guaranteed that she became desperate and went off the rails, as is her pattern. She conned her only real girlfriend, Detective Lani Price Grant (Sal Stowers) into believing she was going in peacefully to the Salem Police Department only to manage to slip out of custody, once again! From there she begged her brother Chad DiMera (Billy Flynn) for a huge favor, although he would be hesitant to help her go on the run considering the last time she escaped it was him and Tony DiMera (Thaao Penghlis) who returned her to custody, as Days of Our Lives viewers will recall! This was back when Brady was shot in the process of trying to protect Philip Kiriakis (Jay Kenneth Johnson) from the Vitali family henchmen, along with Chloe who insisted on helping protect Philip as well.

Days of Our Lives viewers will recall how desperately Kristen wanted a baby of her own, and for how many years. It is inconceivable, now that Brady has dumped her that she will not want to take her only child along with her on the run! Days of Our Lives viewers know that in order to do so, she will need to kidnap Rachel as it is pretty much guaranteed that Brady will not let Kristen near their daughter! But Kristen will have to likely come up with a whole different disguise in order to slip away with Rachel and make it out of town to go on the run!

Days Of Our Lives (DOOL) Spoilers: Brady & Kristen Finds Themselves At A Crossroadshttps://t.co/63eE4OwlvJ

Sometimes Rachel is with a nanny and sometimes she’s at Brady’s stepmother and father’s, Dr. Marlena Evans (Deidre Hall) and John Black (Drake Hogestyn) home. There, Kristen would have to try and sidestep Sami DiMera (Alison Sweeney) who is still staying there for the time being, herself and Lucas Horton (Bryan Datillo) by now having been freed from the DiMera wine cellar, where Kristen had imprisoned them. Kristen tried to get a broke and desperate Xander Kiriakis (Paul Telfer) to kill them, but Sami outbid Kristen on Xander’s fee – even though EJ DiMera (Dan Feuerriegel) appears to have put a stop payment on the wire transfer and had it pulled back out of Xander’s account.

Days of Our Lives viewers will recall that when Xander saw the money in his account for that short time, that Marlena was in the mansion and Xander left the door to the wine cellar open. Should Kristen manage to slip out with Rachel from wherever she is being cared for, she more than likely will go to the Greek island she was going to send Kate to in a duffel bag and where Sarah may or may not have made it to in that steamer trunk safely! It may be the island once owned by Stefano DiMera (Joseph Mascolo).