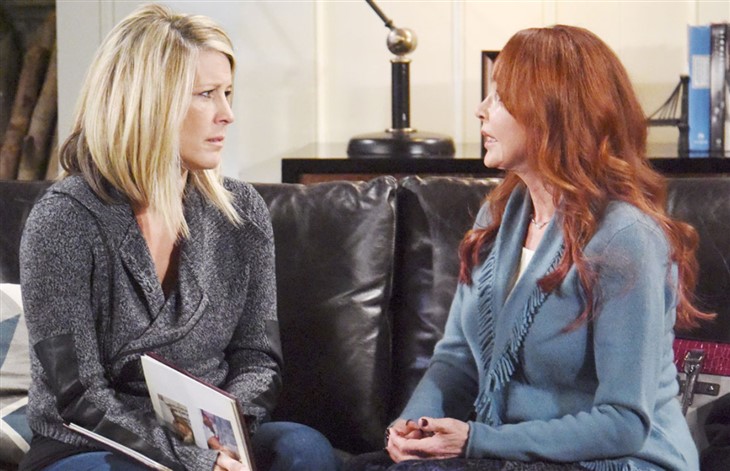 General Hospital (GH) spoilers tease that Bobbie Spencer (Jacklyn Zeman) has been put in yet another potentially dangerous situation. As viewers know, Bobbie had recently been acting as Florence Grey’s (Annie Abbott) personal nurse as a favor to her daughter Carly Corinthos (Laura Wright). Carly had taken Florence as a way to keep Florence’s son, Cyrus Renault (Jeff Kober) in check.

But Cyrus was desperate to find his mother, and if he had located her, Bobbie’s life might very well have been in danger. As it turned out, it was Nikolas Cassadine (Marcus Coloma) who found Florence and he made sure no one was hurt as Florence returned to Cyrus.

Now that she is no longer Florence’s nurse, one would think that Bobbie wouldn’t be in any rush to take on another dangerous assignment. And yet, Maxie Jones’s (Kirsten Storm) request of Bobbie may put yet another target on Bobbie’s back. Maxie is desperate to keep her about to be born baby away from her father, Peter August (Wes Ramsey). Having recently discovered just how dangerous Peter is, Maxie knows she has to keep Peter away from their child. And so she has come up with a plan.

Maxie’s plan involved letting the world believe that her baby died while in truth, the baby would be given to Brook Lynn Quartermaine (Amanda Setton) to care for. In order to make this crazy plan work, Maxie would need someone to deliver the baby and hand it off to Brook Lynn. And that’s where Bobbie would come in. But the dangerous part would be when Peter finds out his baby is gone.

General Hospital Spoilers – If Peter August Finds Out That Bobbie Spencer Has Deceived Him, Then HGer Life Could Be In Danger.

Peter has become more dangerous with each passing day. He is responsible for the deaths of both Drew Cain (Billy Miller) and Franco Baldwin (Roger Howarth). In addition, he has poisoned Harrison Chase (Josh Swickard) in order to keep Anna DeVane (Finola Hughes) from taking any action against him. If he believes, or even has the slightest inkling, that Bobbie is lying about his baby he won’t hesitate to threaten her or those she cares about with bodily harm. Hopefully, Maxie’s plan will succeed and Peter will simply believe his baby is dead.

Will Maxie’s plan work, or will Peter catch on? Will Bobbie or someone she cares about is put in danger or will Peter leave her alone? Babies born in Port Charles are always surrounded in danger so stay tuned to General Hospital airing weekdays on ABC. And don’t forget to check back right here regularly for all your General Hospital news, information and spoilers!