The Bold and the Beautiful (B&B) Spoilers: Can Brooke And Ridge’s Marriage Survive? 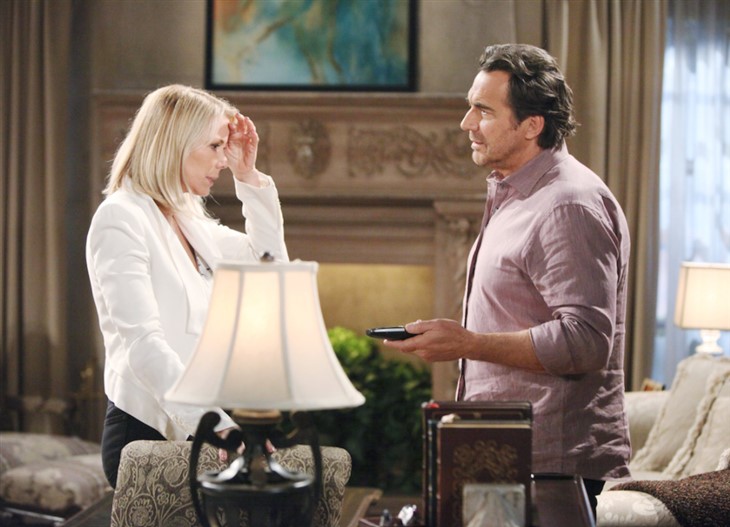 The Bold and the Beautiful (B&B) spoilers and updates reveal Ridge Forrester (Thorsten Kaye) and his wife Brooke Logan Forrester (Katherine Kelly Lang) are happily married. Their marriage has survived many trials in the past. Recently Ridge and Brooke were able to find a way to keep their marriage together when Quinn Forrester (Rena Sofer) nearly destroyed it.

Quinn thought that her friend Shauna Fulton (Denise Richards) would be a good match for Ridge. She tried to put Shauna and Ridge together even though Ridge was married to Brooke. Quinn did not succeed in her efforts because Ridge and Brooke stayed together in the end. However, Ridge and Brooke do not know that there are secrets that could tear their marriage apart.

Ridge has a good friend Carter Walton (Lawrence Saint-Victor) who he respects. Carter was having trouble with his relationship with Zoe Buckingham (Kiara Barnes). Zoe turned to Quinn to get her help to win Carter back. Quinn was having trouble with her relationship with Eric Forrester (John McCook). Eric was not happy with Quinn because she tried to sabotage his son Ridge’s marriage. Quinn started to confide her problems to Carter. In the end, Quinn and Carter had a one-night stand. Shauna was able to help Quinn and Carter to keep their secret from Eric and Zoe. She claimed to be the woman that Carter had been with when Zoe found him in bed with another woman.

Carter has decided to go back to Zoe. Eric has decided to give Quinn another chance. Ridge will be happy for Carter but will not understand why he would be with Shauna. Brooke will believe that Shauna took advantage of Carter. However, Ridge and Brooke may have problems with each other when they find out that Quinn was the one with Carter. They might feel that Eric and Carter should stay away from Quinn. They may disagree with what Shauna did to protect Quinn and Carter.

B&B Spoilers – Liam Spencer And Bill Spencer Have A Secret

Brooke wants her daughter Hope Spencer (Annika Noelle) to be happy. She believes that Liam Spencer (Scott Clifton) is the one with who Hope should be. She does not know that Liam is in trouble and that Hope could get into trouble as well. Liam had a one-night stand with Steffy Forrester (Jacqueline MacInnes Wood) who found out that she was pregnant. She needed a paternity test to find out if Liam was the father.

The test showed that Liam was the father. However, Thomas Forrester (Matthew Atkinson) found out that Dr. John Finnegan (Tanner Novlan) was the father of Steffy’s baby. His friend Vincent Walker (Joe LoCicero) had altered the test results in a misguided attempt to put Thomas and Hope together. Liam and his father Bill Spencer (Don Diamont) were out for a drive when Liam accidentally hit Vinny with the car. Bill covered up the accident after Liam passed out. Liam has told Hope about the accident. Hope and Liam had been having trouble with their marriage after the one-night stand. Hope wanted to make their marriage work again.

Hope is upset that she may lose Liam. Brooke had wanted Hope and Liam to have a good future together. Ridge cares about his son Thomas. He has seen that Thomas has been upset that Vinny died and wants to find out who killed him. Brooke and Ridge may not be able to come to an agreement over what has happened in regards to Vinny’s death.

Will Brooke agree with Ridge? Will she try to go after Shauna and Quinn? Brooke will want to protect Hope. Will she still believe that Liam is the right man for Hope? Will she blame Bill for putting Liam and Hope at risk? Will Ridge be able to stop Thomas from going after Liam and Bill? Will Ridge think that Thomas would be good for Hope? Will Ridge and Brooke disagree over Thomas in regards to Hope? Tune in to Bold and the Beautiful to find out if Ridge and Brooke will be able to stay together when they find out the secrets that others have been keeping.