The Bold And The Beautiful (B&B) Spoilers: Hope Forced To Choose Between Thomas And Liam After Thomas’ Arrest 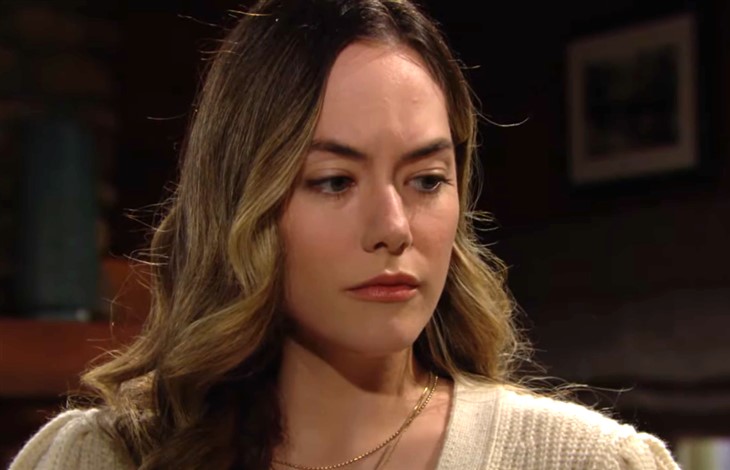 The Bold and the Beautiful (B&B) spoilers indicate that Hope Logan (Annika Noelle) will have to make a choice between two men in her life.

Hope’s life is once again in upheaval thanks to Liam Spencer (Scott Clifton). After a brief separation, the couple reunited. However, their plans for happy family life are about to come crashing down.

Liam recently confessed that he is the one responsible for Vinny Walker’s (Joe LoCicero) death. Now, the couple’s future is up in the air, and Hope’s going to have to make a decision.

Liam’s revelation took Hope by surprise. Yet, when she heard the full story, she realized it was an accident and Liam wouldn’t purposely kill someone. Hope’s whirlwind of emotions soon turned to anger when she learned Bill Spencer (Don Diamont) is covering up Vinny’s death.

Bill thinks he’s doing the right thing by protecting his son, but in reality, he’s making things worse. The right thing was to go to the police and confess. But by covering up Vinny’s death it’s painting him and Liam in a bad light.

Hope knows that what happened to Vinny was an accident. However, the police won’t see it that way when the truth comes out.

Hope’s plans for a future with Liam will be destroyed by the possibility of prison time. She and Liam are going to be left with a huge dilemma as they deal with the aftermath of his confession.

Previews for next week indicate someone will be arrested for Vinny’s death, and that person is Thomas Forrester (Matthew Atkinson). Although Thomas and Vinny were friends, police know there was some hostility due to Vinny switching Steffy Forrester’s (Jacqueline MacInnes Wood) test results. With police believing he had a motive, they place Thomas under arrest.

When news of Thomas’s arrest hits, Hope and Liam are going to be wrestling with a bigger dilemma. Thomas’s future is at stake with him facing life behind bars.

Hope can’t stand the thought of Thomas going to prison for a crime he didn’t commit. Yet, at the same time, she doesn’t want Liam to go to jail either.

Both men stand to lose a lot besides their freedom. Thomas’s main joy is his son Douglas Forrester (Henry Joseph Saimiri), and he’s the only parent the young boy has left. Meanwhile, Liam can say goodbye to his plans for a future with Hope and their daughter.

The Bold And The Beautiful Spoilers – Which Man Will Hope Choose?

The storyline of Hope caught in the middle of Thomas and Liam continues. But now stakes are high as she has a decision to make.

With this situation spiraling out of control, Hope must choose which man she’ll help. Does she come forward with the truth and risk losing Liam? Or will she let Thomas take the rap to protect Liam?