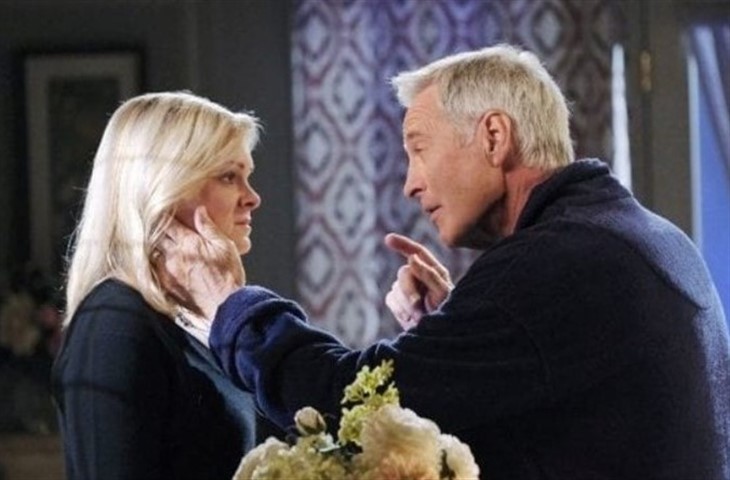 Days of Our Lives (DOOL) spoilers tease that when Belle Black Brady (Martha Madison) is sent to Statesville Prison for the murder of Charlie Dale (Mike C. Manning) in an upcoming episode of Days of Our Lives, John Black (Drake Hogestyn) will regret wanting to remember the night it happened!

Days of Our Lives viewers will remember that Belle made a deal with Jan Spears (Heather Lindell) to save her and Shawn Brady’s (Brandon Beemer) daughter Claire Brady’s (Isabel Durant) life. Jan kidnapped Claire in a plot to get Belle out of the way so she could once again pursue Shawn, even though Shawn and Belle had previously agreed on a plot to trick Jan into confessing to Charlie’s murder. Shawn even kissed Jan, after staging a fight with Belle walking off angry to make it appear real.

Shawn had told Jan to meet him at a room in the Salem Inn, but that plan was foiled by Dr. Clay Snyder, (Michael Lowry) who admitted to Belle that Jan knew that she and Shawn knew she had faked a major portion of her coma. Snyder himself had been part of the reason that Jan figured it out, which of course upset Belle greatly as well as Shawn!

Upon getting a call from Jan in which she hurt Claire to get her to cry out so her parents could hear it and prove she had Claire, Belle made a deal – she would turn herself in and confess to Charlie Dale’s murder and Jan could have Shawn, as long as she let Claire go! Days of Our Lives viewers will recall that all the evidence substantiated that Belle murdered Charlie; her missing button from her red hooded coat, and the tape Jan stole from Dr. Marlena Evans’ (Deidre Hall) office where she hypnotized Belle’s father John Black because he wanted to remember what happened that night to make sure he didn’t kill Charlie!

Both his rage and his headaches come from that brain aneurysm he had suffered several months back. So, he asked Marlena to hypnotize him, and she finally agreed and taped the session, as she usually does with any other patient whether she uses hypnosis or not. John remembered someone in Belle’s red coat shooting Charlie, but he assumed it was Belle because he only saw her from the back, and recognized the coat!

Days of Our Lives viewers now know that Jan planned this frame-up of Belle, broke into her and Shawn’s house, stole her coat for a night, and even tore off a button and left it in Charlie’s apartment! Jan found Kate Roberts’ (Lauren Koslow) gun in between when Allie Horton (Lindsay Arnold) left, leaving the gun, Tripp Johnson (Lucas Adams) knocked on the door, and didn’t realize John saw anything.

Then, Ava Vitali (Tamara Braun) came and Charlie died in his mother’s arms, and after she left Sami DiMera (Alison Sweeney) showed up. John and Marlena both know that Belle made this deal to save Claire’s life, but hindsight is always twenty- twenty. John now regrets with all his heart wanting to remember that night, because if he hadn’t, Belle wouldn’t be in Statesville Prison!