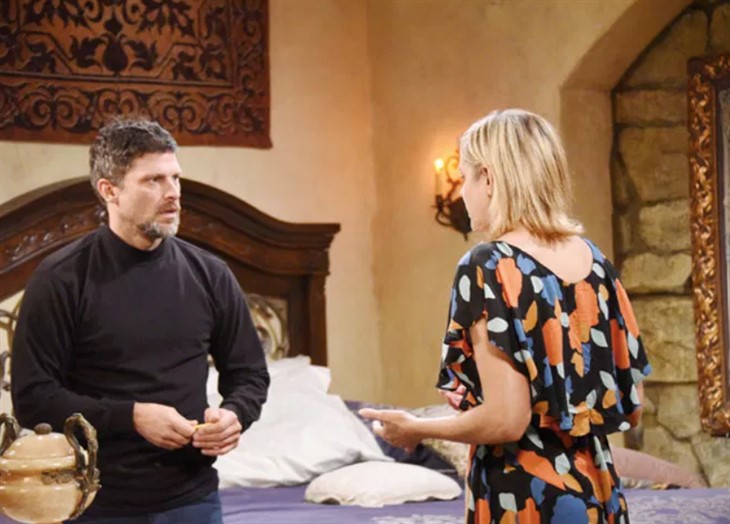 Days of Our Lives (DOOL) spoilers tease that when Eric Brady (Greg Vaughan) does return home to Salem and to his bride, Nicole Brady (Arianne Zucker) will struggle with whether to confess her one night stand with Xander Kiriakis (Paul Telfer) to him before her blabbermouth sister-in-law Sami Brady DiMera (Alison Sweeney) does in an upcoming episode of Days of Our Lives!

Days of Our Lives viewers will recall that Nicole thought Eric would never return from Africa and that he didn’t want to! He had told her he had made plans several times to return and then something would always come up, time and time again! This last time that he called her telling her the trip was canceled, Nicole had had enough!

Days Of Our Lives (DOOL) News: Lindsay Arnold Has High Praise For Greg Vaughan – Is He Coming Back?

Days of Our Lives viewers will remember that she went over to Brady’s Pub to de-stress with some cocktails but wound up downing one drink after another with Xander Kiriakis, (Paul Telfer) who was already quite boozed up. If Roman Brady (Josh Taylor) had been there that day tending bar he’d have probably told them both to go home and not sold them any more drinks!

The two ex-spouses and not quite enemies but not quite frenemies either were sloppy drunk when they headed over to his room at the Salem Inn, and Nicole frankly attacked Xander with passion, and not very many men faced with a drunken and lusty woman will resist, and Xander doesn’t exactly have strong morals!

Nicole regretted it as soon as she woke up and remembered what happened, but she sure didn’t regret anything during the night before! The only problem was is that unbeknownst to either her or Xander, Sami Brady DiMera (Alison Sweeney) saw them walk into the hotel together drunk and all over each other, and it didn’t take a detective to figure out what was going on! Sami then threatened to call Eric and tell him when she finally confronted Nicole with what she had witnessed!

Days of Our Lives viewers will have noticed in the new summer preview that Eric returns home and it looks like he surprises Nicole! How long he stays – if it’s a short visit and he has to return for that additional mission tour of duty, is unsure.

Days of Our Lives fans will have to tune in to find out. But Nicole now has to deal with her guilt over her one-night stand in Eric’s presence, and still with the threat of Sami telling him before she does!

Either way, it could tear up her marriage, and Nicole is almost certain that once Sami finds out Eric is in town, she’ll be chomping at the bit to spill the sinful tea! Nicole hopes that EJ DiMera (Dan Feurreriegel) who has also come back to Salem, will keep Sami occupied and busy so she won’t ruin Nicole’s marriage! The only problem is, Nicole’s guilt is even showing up in bed with Eric.

Days Of Our Lives (DOOL) Spoilers: Jan Gets Rid Of Killjoy Chloe, Sells Hostage To Philip For Cash And Private Jethttps://t.co/HNEtyIPV8D

After months apart, it was a sweet reunion but he wants to know what’s wrong – she’s not as enthusiastic as he figured she would be! Is there something wrong with her daughter Holly Jonas (Elin Alexander)? Is Allie Horton (Linsday Arnold) okay? Is baby Henry Horton (Jayna and Kinsley Fox) okay?

Is something wrong with Nicole herself – is she not feeling well? Nicole will have to think quickly because now not only has she had to hide her sinful secret from Rafe Hernandez (Galen Gering) who was also concerned about her, now she has to decide whether to come clean to Eric or not! What will she do?