General Hospital (GH) Spoilers: Anna and Peter Showdown – She Needs Something From Him, NOW 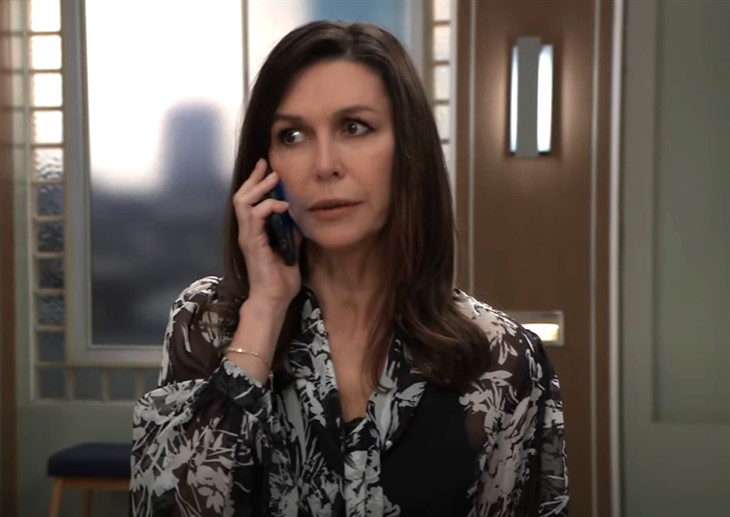 General (GH) Hospital Spoilers: Anna Vents About Peter To Obrecht – Will They Team Up?

Finn is still dependent upon Peter August (Wes Ramsey) for the antidote for the toxin that Peter claims he invented that was actually meant for him. Chase, unfortunately, spun the coffee cup to himself in the wheel of misfortune at the family dinner he, Finn, Gregory Chase (Gregory Harrison), and Jackie Templeton (Kim Delaney) had at Beradino’s. Anna Devane (Finola Hughes) now has to go to Peter to get more antidote from him.

As she approaches him in his office at “The Invader”, which is on the top floor of The Metro Court not far from Crimson Magazine’s offices, he has news for her – he’s sold the paper and will no longer have an office there. Peter tells her that he sold it to a private investor, and although the transaction happened quickly, he did manage to turn a profit. Anna smiles and congratulates him – and in what may be sort of a backhanded compliment, notes the loss of “The Invader” will be a real loss to journalism!

GH Spoilers – Peter August Gets To The Point

Peter then responds, telling Anna it really won’t be too much of a loss, especially when the only point of having a legitimate business was to portray himself as being an upstanding member of society! General Hospital viewers will agree not a truer word was spoken! Peter then rather snidely remarks to Anna how she and Valentin Cassadine (James Patrick Stuart) had done a very nice job of ruining that for him!

General Hospital viewers will remember that Valentin and Anna exposed his crimes at the double wedding that she and Finn and he and Maxie Jones (Kirsten Storms) were supposed to get married at, which resulted in the breakups of both couples involved. Peter then goes from behind his desk to a credenza across the room, and fiddles with a drawer, from which he gets a handful of files. Anna tells him that she thinks he did a fine job of ruining his life all by himself, and reminds him that he had many chances to become what he portrayed himself to be, and this is what he did with them!

She also says that she thinks that pretty soon he will be held accountable for his choices, and tells him that she is being held accountable for hers. He shakes his handful of files in her face as he tells her to just keep telling herself that! Peter is almost hissing like a snake as he sarcastically tells her he remembers that she has no evidence of wrongdoing against him – and even if she did, there would be nothing she could do about it because she still needs something from him, doesn’t she? Peter displays an evil grin as he asks Anna if she is right – isn’t that the reason she’s really here? Anna just looks at him with an “I mean business” look on her face!