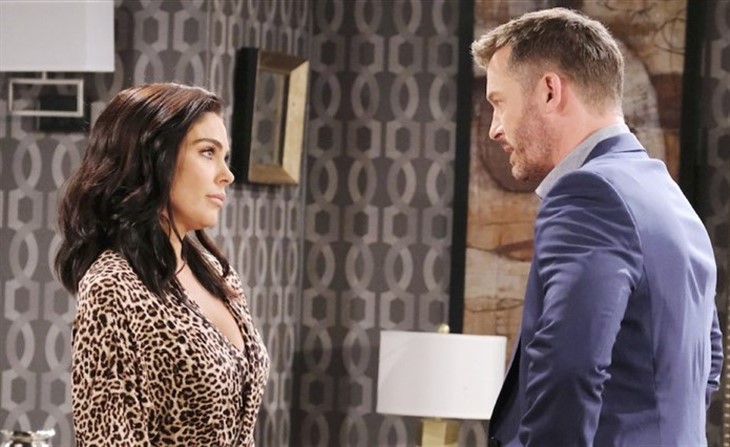 Days of Our Lives (DOOL) spoilers reveal that Chloe Lane (Nadia Bjorlin) will struggle with her upcoming love triangle. Eventually, she will choose Brady Black (Eric Martsolf). That means ‘Bhloe’ will become a family with Rachel Black (Josephine and Rosalind May). Just when they become a family, that’s when Kristen DiMera (Stacy Haiduk) will make her vengeful and vicious return.

DOOL spoilers reveal that Chloe is being held hostage by Jan Spears (Heather Lindell). However, Philip Kiriakis (Jay Kenneth Johnson) saves her, which will kick off a love triangle story. Chloe will be torn between Philip and Brady for a while. Eventually, she makes her decision. As soap fans know, when one problem or conflict is resolved, there is another one lurking in the shadows.

Days Of Our Lives Comings And Goings: Carson Boatman Cast As A Grown Up Johnny

The summer promo indicates that Chloe will end up choosing Brady. That makes sense since Chloe and Brady’s feelings for each other have already been confirmed in recent episodes. Philip has made his intentions clear but Chloe has turned him down. Even the spontaneous kiss didn’t give Chloe any sparks. However, she will still be torn between Philip and Brady because of who rescues her from Jan. In the end, Chloe will have to be with the man who makes her heart flutter. A gratitude romance is just as doomed as a pity relationship, so we are placing our bets on “Bhloe.”

Days of Our Lives spoilers reveal that Brady broke up with Kristen and wants nothing to do with her ever again. Instead of going back to prison, Kristen managed to slip out of Salem. That means she is on the run. She also has a broken heart and we all know how Kristen handles rejection. Instead of taking responsibility for ruining her own relationship, she will put the blame on Chloe.

In a recent episode, Kristen mentioned that she would get Brady back. She has never been able to really hear what people are saying. She’s also delusional and will go to extremes to get what she wants. We can see her making Brady her prisoner of love, especially if he won’t be with her willingly.

We also know that having a child was Kristen’s dream for years. So, there is no way she’s going to let Chloe raise Rachel Black (Josephine and Rosalind May). She won’t let anyone else be a mother figure to Rachel, especially Chloe. So, when will Kristen return? Well, “Bhloe” has to get through the love triangle first. When that happens, Brady and Chloe could decide to become a family with Rachel. Everything will seem perfect and like it’s finally working out. That is when the couple will face their next obstacle. However, will Brady and Chloe be able to survive Kristen’s vicious and vengeful scheme?