The Young And The Restless (Y&R) Spoilers: Summer Makes A Surprise Announcement – Is She Pregnant? 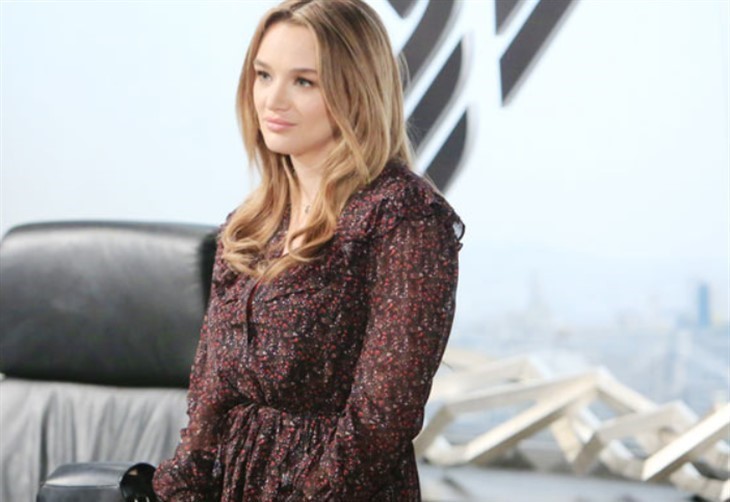 The Young and The Restless (Y&R) spoilers tease that Summer Newman (Hunter King) will make a surprise announcement in an upcoming episode of Y&R! Is she pregnant? If she is, will it save her relationship with Kyle Abbott (Michael Mealor)?

Viewers of The Young and The Restless can tell that Summer has been feeling like a third wheel in her relationship with Kyle since Tara Locke (Elizabeth Leiner) and little Harrison Locke (Kellen Enriquez) showed up in Genoa City wanting Kyle’s help. Summer wasn’t so worried when Kyle wasn’t so willing to be a hands-on father complete with baby mama in his life, but now she has been feeling excluded.

The Young And The Restless (Y&R) Spoilers: Kyle Learns The Truth – Will He Keep Harrison In His Life?

She’s already postponed setting a wedding date, something she thought would be perceived by Kyle as a red flag in their relationship. But he seemed to barely notice, as viewers of The Young and The Restless will recall. Tara certainly made her pitch well – she perfectly played the part of an abandoned and possibly abused trophy wife who was afraid of her much older husband, and playing the unfit mother threat card.

Phyllis Summers, (Michelle Stafford), Summer’s mother, wasn’t buying what Tara was selling, and especially not when she noticed Tara and Sally Spectra (Courtney Love) having been chummy here and there. Summer is afraid – she is afraid that she will lose Kyle yet again to another woman – and this one with a little boy who looks like Kyle! Of course, there was a paternity test done – finally. Summer now knows it’s true, that Harrison is Kyle’s little boy and Tara and Kyle will take up a great deal of his time. She has to come up with a plan of attack!

Viewers of The Young and The Restless know that Summer is her mother’s child as well as her father’s. Nick Newman (Joshua Morrow) would gladly step in and settle the issue once and for all but Summer wants to fight her own battles. The one thing that she has to learn is to not appear weak or emotionally dependent on Kyle, but this is the second time he’s turned his attention to another woman – albeit not directly or by romancing Tara. But Summer, as viewers of The Young and The Restless can tell, is a bit of once burned twice shy.

To compete with Tara, she is going to have to use the oldest trick in the book and she’s going to have to do it for real! But is Summer really ready to be a mother to her own child with Kyle? In this day and age, of course, she wouldn’t “have to get married” because she’s “knocked up” and Kyle doesn’t “have to make an honest woman” of her. But the main attraction seems to be Kyle’s being convinced he has to step up as the tot’s father.

The Young And The Restless (Y&R) Spoilers: Will Chelsea Walk Free?https://t.co/c9jy5aXZp8

What would happen if Summer turns up pregnant? His loyalties and attention would naturally have to be directed towards her and their baby! Summer cannot be so cruel as to demand Kyle not be a father to Harrison but does Tara always have to be included? Maybe until Harrison gets to know him better but that seems to have already happened. Summer decides to go off birth control and see what happens – and lo and behold, it doesn’t take long! She might pick a time right in front of Tara and Kyle’s father Jack Abbott (Peter Bergman)! She’s a little worried about what her own parents might think though! Phyllis might not be ready to be called Grandma!

Stay tuned to The Young and The Restless, and keep checking The You

ng and The Restless spoilers frequently for all the latest news, updates, and developments!