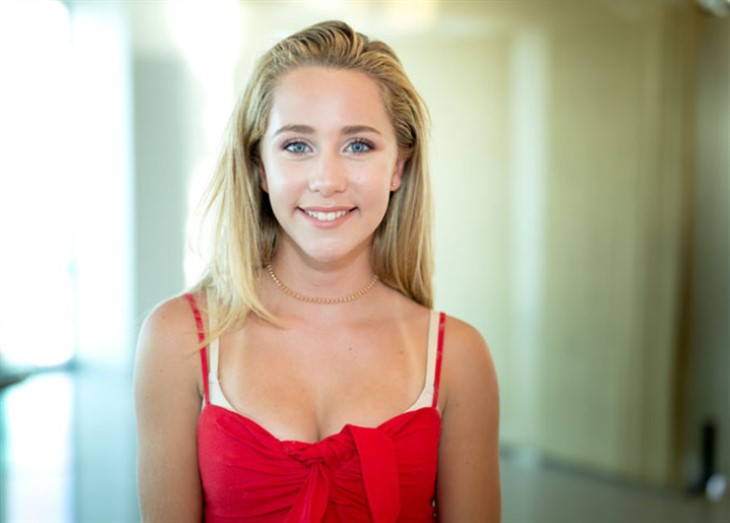 General Hospital (GH) spoilers indicate that Eden McCoy is capturing her last minutes of high school as she graduates. What is next for the popular G.H. teen?

Congratulations are in order for General Hospital’s Eden who plays Jocelyn Jacks. Eden has made the huge accomplishment of graduating from high school. General Hospital fans have seen for years how talented and bright Eden is. Eden joined the GH cast in October 2015 when Jocelyn was SORASEd for storyline purposes. Jocelyn is the daughter of Carly Corinthos (Laura Wright) and Jasper Jax (Ingo Rademacher) and the stepdaughter of Sonny Corinthos (Maurice Benard).

Eden was 11 when she joined the GH cast and has worked along with her onscreen parents as well as Steve Burton. McCoy also worked with Billy Miller, ex-Drew Cain). Eden has proven that she can stand toe to toe with the leading actors and give show-stopping performances. Now she has graduated high school and is getting ready to get out into the world. Perhaps Eden will explore college options like Jocelyn.

GH Spoilers – Eden McCoy Has Grown Up Before Our Eyes

General Hospital fans have watched Eden grow up before their eyes. In some ways, Eden is mirroring Jocelyn’s life. Jocelyn is getting ready to graduate as well and head off to college. Eden will attend the University of Southern California as a member of the class of 2025. Eden took to Instagram to share her story including photos of the joyous occasion. Photos include one of a homemade crown created by her mother. Eden proudly shares the photo stating that it was her mom who created it for her special day.

General Hospital’s Eden shared several graduation photos with her friends and family as well as fans. Eden captioned the photos with “that’s a wrap” referring back to her work environment. Fans are all thrilled for Eden and proud of her accomplishments. However, fans hope that Jocelyn sticks around as well. Jocelyn could leave town with Jax if things get too rough in Port Charles. However, the powers that be are pretty lenient about working with their actor’s schedules. McCoy seems to be a favorite of the ABC executives.

We wish Eden well with college and congratulate her on her accomplishments. Of course, we don’t expect Eden’s life to have nearly the amount of drama that Jocelyn has experienced so far. Fans certainly look forward to seeing what Eden’s future holds. We will be certain to post updates as we get them.