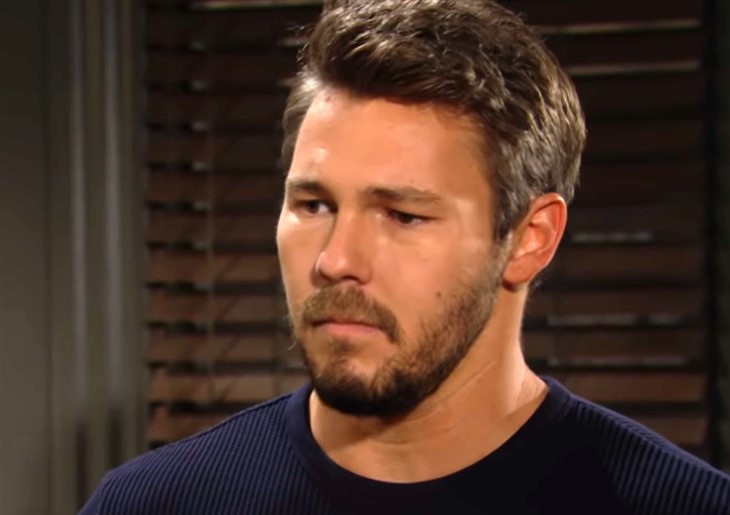 The Bold and the Beautiful (B&B) spoilers document that Liam Spencer (Scott Clifton) head-faked his father into leaving the Los Angeles Police Department building. Liam did so in a misguided attempt to right a number of wrongs.

While Liam’s confession to Deputy Chief Bradley Baker (Dan Martin) was honest, his description of events left Bill Spencer’s (Don Diamont) presence out of the equation. That was a mistake.

Liam put himself in a bad position by telling the Deputy Chief a veiled story. Now, like Vincent Walker (Joe LoCicero), Clifton’s character is likely to pay a price for his actions.

Thomas Forrester’s (Matthew Atkinson) description of his childhood friend is colored by emotion. Thomas has repeatedly said that Vinny was a good person who made bad choices.

The truth is that Thomas enabled Vinny by not intervening. Vinny illegally obtained drugs and sold them. Both actions are crimes, with the second one being violent because he put the lives of others in danger with every sale he completed.

Unlike John Finnegan (Tanner Novlan), Vinny wasn’t issued a license to practice medicine in California. That’s why Vinny’s drug sales weren’t just bad choices, they were crimes against the state.

Vinny’s warped view of reality allowed him to believe that rigging Steffy Forrester’s (Jacqueline MacInnes Wood) paternity test was okay. It wasn’t, he was arrested as a result, went to jail, was released on bond, and somehow wound up crossing Mulholland Drive on the night Liam hit him.

In all likelihood, Vinny would not have been walking across Mulholland Drive on the night in question. That scenario developed because of all the choices he made leading up to that fatal event.

There are positive outcomes in life. But there are also negative consequences based on certain situations. Vinny’s free will choices led to avoidable doom. The same is now true for Liam.

The Bold And The Beautiful (B&B) Spoilers: Liam Is Finally Under Arrest, Hope Shattered https://t.co/3jQOOvmzXv pic.twitter.com/GmRhmQL0BN

Liam wasn’t actually prepared to tell the truth. He wanted to craft a confession that’s separate from reality.

Attempting to relieve his conscience, while also engineering the outcome Liam wants isn’t a confession. He’s attempting to manipulate the legal system, which the Deputy Chief will resent as soon as he confirms that Bill was in the car that hit Vinny on the night in question and then engaged in a cover-up.

Bill’s realization that Liam and Hope didn’t follow him back to Spencer Publications will spark a passionate response. That sets up further mayhem on B&B.