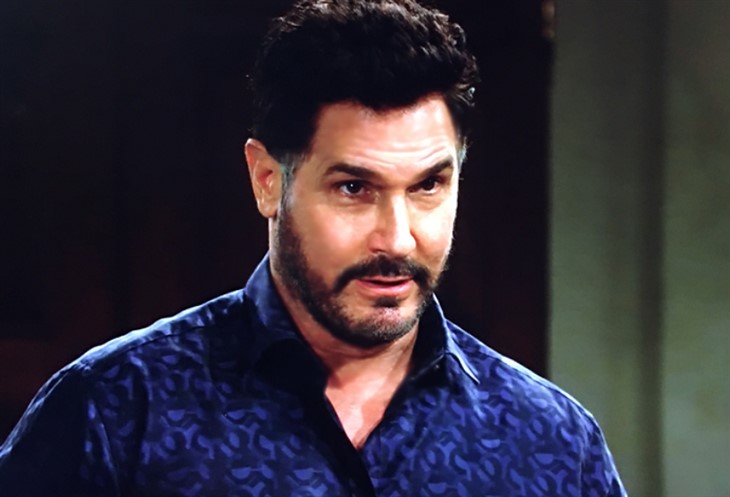 The Bold and the Beautiful (B&B) spoilers document Bill Spencer’s (Don Diamont) expectations that Liam Spencer (Scott Clifton) accepted his advice represented what was desired, rather than what happened.

Liam’s decision to fake his dad out, stay at the police station, and confess to Deputy Chief Bradley Baker (Dan Martin) means that reality has totally shifted on B&B.

Now, after realizing what his son did, Bill will try to fix the plan that Liam broke. But that’s not possible at this point in the plot.

The Bold And The Beautiful (B&B) Spoilers: Paris Finds Out About Quinn And Carter

The Bold And The Beautiful Spoilers – Liam Spencer Needs A Lawyer

Liam didn’t consider the two questions Martin’s character asked him. What happened to the car he was driving the night he hit Vincent Walker (Joe LoCicero) and why were the dead man’s wallet and smartphone missing?

After hearing those questions it was obvious that Liam hadn’t thought his confession plan through. So, he told the Deputy Chief that he needed a lawyer. Liam was then booked and put in jail.

At least Hope Spencer (Annika Noelle) was with Liam while he was confessing and had a chance to say goodbye to him. She offered the maximum possible solace before Liam was led away in handcuffs.

Hope’s purposeful tell to Liam, about fully forgiving him, was very wise. Liam is a heavy over-thinker. So, Hope gave him something to hold onto. He knows that she was sincere in not wanting him to obsess about the night with Steffy Forrester (Jacqueline MacInnes Wood).

It was important for Hope to reinforce that emotional point. Liam knows that the totality of all circumstances led to him leaving the cabin with his dad and driving on Mulholland Drive to Bill’s mansion. Liam wouldn’t likely have been doing that if Lope wasn’t separated because of the cliff house incident.

The Bold And The Beautiful Spoilers – Bill Spencer Predicted This Outcome

Bill implored Liam to tell no one what happened to Vinny. Diamont’s character believed that he needed to cover up the accident because the authorities wouldn’t believe Liam was innocent, even if they had remained at the scene and called an ambulance.

Deputy Chief Baker laid into Liam because he could sense Clifton’s character wasn’t being fully honest. Bill knows that this can of soapy worms didn’t need to be opened. But Liam felt compelled to be the opener and now there’s no way to know what consequences he or Bill will face.