The Bold And The Beautiful Spoilers: Ridge Tells Thomas About Arrest, Steffy Reaches Out To Hope 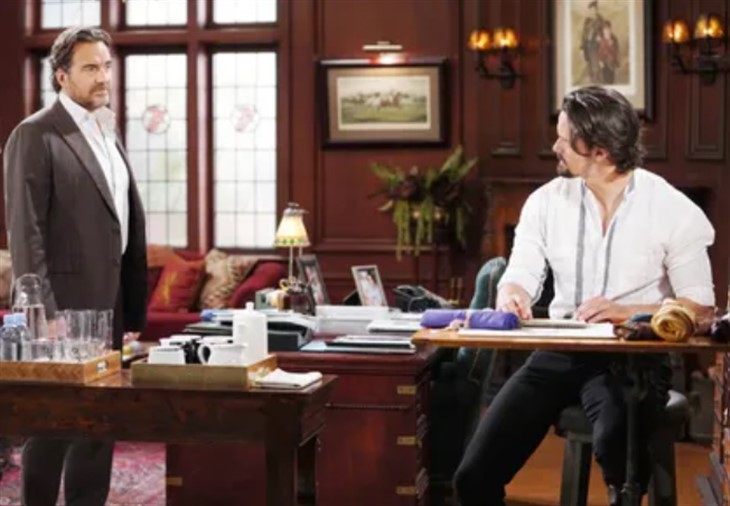 The Bold And The Beautiful Spoilers – Liam Spencer’s Arrest

B&B spoilers reveal that Liam couldn’t take the guilt anymore. With Hope’s support, he turned himself in and confessed. Now, Liam has been arrested and charged with the murder of Vincent “Vinny” Walker (Joe LoCicero). Hope had the chance to tell Bill Spencer (Don Diamont) and Brooke Logan Forrester (Katherine Kelly Lang). Next week, more people will find out about the shocking turn of events.

Ridge most likely finds out about Liam’s arrest from his wife, Brooke. He knows that Deputy Chief Bradley Baker (Dan Martin) will probably give Thomas an update on the case. However, Ridge feels that Thomas might react better to the news if it comes from him rather than the police. Plus, Thomas has taken Vinny’s death really hard. Ridge knows that his son can be unpredictable and will want to be sure he doesn’t do anything extreme.

The Bold And The Beautiful Spoilers – Thomas Forrester Explodes

The Bold and the Beautiful spoilers reveal that Thomas will be stunned when Ridge tells him about Liam’s arrest. After all, Liam knew just how much Thomas was suffering and wanted the killer caught. Liam even offered a weird apology to Thomas at one point. After getting over the shock, Thomas will explode with rage. He might even question Hope to find out if she knew all along. Of course, Hope just recently found out herself and that is what she will tell Thomas.

When Steffy learns the news about Liam’s confession and arrest, she will be shocked. She was married to the man and shares a child with him. She knows him well and can’t believe that Liam is even capable of taking someone’s life. Her next concern will probably be Hope and the kids.

Even though it is still angry over the “Steam” one-night stand, Steffy will probably still reach out to Hope. Right now, Hope’s not even thinking about what happened between Liam and Steffy. Her main concern is Liam’s uncertain future and what it means for her family.

Of course, Hope might lash out at Steffy. If “Steam” never had that night of passion, there would have been no paternity test, and the hit-and-run probably wouldn’t have happened. Now the next step is for Liam to get a lawyer. What will his future be and is there any possibility of him avoiding prison?