The Bold And The Beautiful (B&B) Spoilers: Zoe Learns About Quinn And Carter’s Affair, Will She Expose Them? 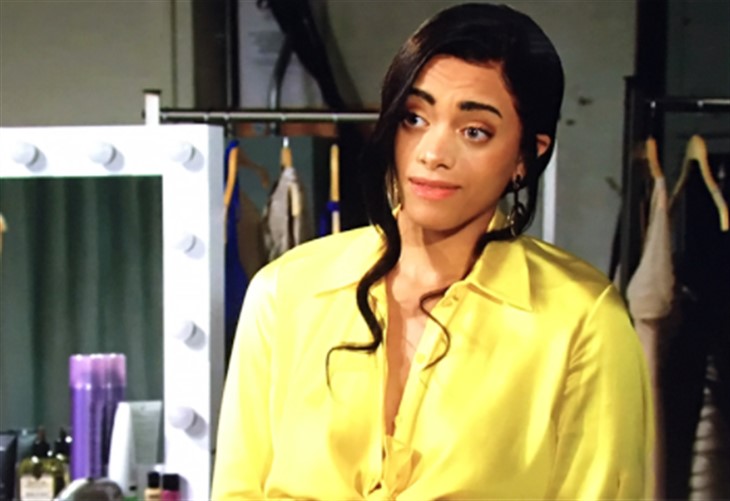 The Bold and the Beautiful (B&B) spoilers indicate that Zoe Buckingham (Kiara Barnes) will be left heartbroken.

Zoe is finally getting a second chance with Carter Walton (Lawrence Saint-Victor). She thought she’d lost Carter after the misunderstanding with Zende Dominguez (Delon de Metz). When she learned Carter had moved on with another woman, she was upset.

But the good news is coming Zoe’s way when Carter proposes. However, the couple’s reunion won’t last long.

Zoe believes that Carter’s mystery woman is Shauna Fulton (Denise Richards). Unbeknownst to her, it’s Quinn Fuller (Rena Sofer) who’s been fooling around with Carter. To cover for her friend, Shauna is pretending that she and Carter were lovers.

With Shauna’s assistance Quinn’s secret remains hidden, but not for long. This week Shauna and Quinn are discussing her affair with Carter when someone overhears their conversation. That person happens to be Zoe’s sister Paris Buckingham (Diamond White).

Paris is going to be faced with a huge dilemma with this piece of information. If this gets out, this would cause a huge scandal for the Forresters, and Carter would lose his job. However, her sister’s happiness is also at stake.

Paris and Zoe didn’t always have the best relationship. When Paris arrived in Los Angeles, she and Zoe were often at odds. Zoe did everything she could to remove her sister from Forrester Creations and ruin her relationship with Zende.

But Zoe had a change of heart, and she and Paris have become closer. It’s because of their newly cemented bond that Paris is going, to be honest with Zoe.

When Zoe learns from Paris that Carter and Quinn are having an affair, she’ll be in disbelief. She wouldn’t believe that Quinn, someone she considered a friend would be betraying her like this. All this time she thought Quinn was helping her win back Carter, but in reality, Quinn was sleeping with her man.

Upon discovering the truth about their affair, Zoe will have no choice but to call off the wedding. She’s not going to marry a man who doesn’t love her.

As for what she’ll do with the secret of Carter and Quinn’s secret, well the lovers are about to feel the wrath of a scorned Zoe.

Zoe isn’t going to let the couple get away with their betrayal. They’re hurting a lot of people with their affair, including Zoe. She wants them to feel the pain they’re causing others, which is why she’ll take pleasure in exposing their affair.

All hell is going to break loose once the secret’s out. Quinn’s hopes of saving her marriage to Eric Forrester (John McCook) will be diminished, and Carter will find himself jobless. As Quinn and Carter do damage control, Zoe’s going to be basking in their downfall.